Olwen Fouéré : ‘I never believed that you could love two people’

This week on Róisín Meets . . . the actor talks open marriage and Waking the Feminists 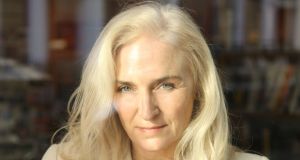 “I never believed that you could love two people. I was always very absolutist,” actor Olwen Fouéré says in the latest episode of the Róisín Meets . . . podcast.

She was speaking about the open relationship she has with her husband of more than 30 years, David Heap.

When Fouéré fell in love with another man while they were both working together, she and Heap opened up their marriage.

While this caused “high drama” at first, she says: “It’s much different now because so much time has passed.

“And I’m so busy, I hardly see either of them.”

The actor, who has worked with the Abbey Theatre, Gate Theatre, the Royal Shakespeare Company and others, calls the Waking the Feminists movement “the new insurrection”.

“I think any opportunity there is to dismantle the hierarchies that we’re living under is key and very important, and that can be through feminism, which is obviously very important.

“I mean, we’ve gone backwards since my day, which would have been in the 70s, when there was an awful lot more achieved that has now been taken away,” she says.

Fouéré also talks about growing up in a French-speaking household in the west of Ireland.

She was brought up in Connemara by Breton nationalist parents, and the wild landscape has informed her work.

One of her career highlights was when she was nominated for best actress at the 2013 Irish Times Theatre Awards for Riverrun, her adaptation of the voice of the river in James Joyce’s Finnegans Wake.

Fouéré currently stars in The Survivalist, Stephen Fingleton’s film about three survivors carrying on as society crumbles, which is in cinemas now.

Fouéré will also perform as part of the Imagining Home series at the National Concert Hall on April 3rd.

Inspired by the 1916 Proclamation, Imagining Home speaks of the State’s cultural journey over the last 100 years, its place in the world today and its future.

The concert on April 3rd is called Out of the Tradition. It will explore the evolution of Irish traditional music.

Full details about the series can be found online.

To listen to the conversation or other episodes of the podcast, go to Soundcloud, iTunes, Stitcher oririshtimes.com.