With its Alfa looks and serious engineering, the Stinger is the Korean make’s big bet 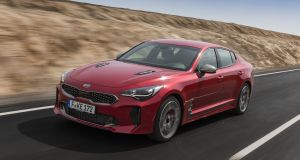 Kia Stinger: the company hopes its new model will lure some buyers away from the Audi A5

Kia’s ambition to be the youthful, sporty brand from Korea gets a shot in the arm with the arrival of its Stinger four-door coupé. Think an Alfa Romeo of the 1990s, only more reliable.

Kia has worked hard to create a character for its range, to distinguish it from Hyundai, its sister make. So far it has largely built this on aesthetics. At one end it put the sleek Sportage and the Optima family saloon, which had touches that would not have looked out of place on a Maserati (even if it never remotely lived up to that comparison once you took it on the road). At the other end was the funky Soul, a car that’s a hit in the United States even if Irish buyers seem not to buy into its look. (I’m a big fan.) In between were several run-of-the-mill motors.

That middle ground is set for a serious injection of styling with the introduction of the new Ceed range next year. And the word is that, far from simply being a functional hatchback, the Ceed will encompass several formats, attempting to keep pace with Volkswagen’s product offensive on the declining family-car market.

Kia has done budget motoring with the affordable Picanto, at the turn of the century. It has done practical motoring with its people carriers and SUVs. Now it aims to do emotion.

Luring buyers away from Audi’s A5

Although it will still be stressing value, Kia hopes the Stinger might lure some buyers away from the likes of the Audi A5. On first reading that ambition seems laughable. Yet it would be foolish to write off the Korean company; just consider how far it has come in the past decade – and how Volkswagen, for example, transformed the image of both Skoda and Seat over the years.

According to Kia’s design chief, Peter Schreyer, “The new Kia Stinger is going to fundamentally change the global image of Kia. I have no doubt it will revolutionise the way people think about us. It’s going to propel us upwards into a different era.”

Kia executives say the Stinger is meant to capture the spirit of iconic 1970s gran turismos, whose owners shot off from Paris to the Côte d’Azur for the weekend. The Koreans clearly view 1970s Europe through very rose-tinted glasses.

Standing alongside the Stinger, its most striking trait is its similarity to the stylish cars that used to emerge from northern Italy. This car has definite Alfa traits.

Inside and the low-slung cabin again is reminiscent of an Alfa-style flair. The dashboard’s centre console is split into two specific areas: the infotainment controls sit below a large colour touch screen; the climate and ventilation controls sit beneath. Even the spoked circular vents are reminiscent of Audi or Alfa interiors.

The Stinger comes with a choice of three engines, depending on the market: a 2.0l turbo petrol engine, a 3.3l twin-turbo V6, and a 2.2l turbodiesel. For the Irish market, the 2.2l is likely to be the big seller, with a handful of V6s picked up along the way.

The 2.0l turbocharged four-cylinder petrol engine produces 255bhp at 6,200rpm, but it’s unlikely to be offered in Ireland to begin with.

The flagship V6 puts out 370bhp and 510Nm of torque, and can hit 100km/h from a standing start in just 5.1 seconds, making it the fastest-accelerating production Kia ever.

And that’s the odd thing about the Stinger, for it doesn’t actually feel especially fast. On a mix of motorway and hill climbs around the outskirts of Frankfurt the V6 version has all the growl and menace you’d expect from a well-intentioned muscle saloon, but it doesn’t quite deliver the pace to set pulses racing. A time of 5.1 seconds should get the heart pumping a little faster, but somehow the car lacks a little of the drama inherent in its European rivals.

According to its chief designer, Gregory Guillaume: “It’s not about outright power, hard-edged dynamics and brutal styling all at the expense of luxury, comfort and grace. It’s about passion.”

That’s all fine and well, but European buyers would still expect the flagship version of a coupé like this to deliver an almighty punch.

On a more positive note, the Stinger features the second generation of Kia’s electronic eight-speed automatic transmission, which is fitted as standard with all engines. It’s a smart and smooth transmission, but in sport mode it could hold the lower gear at high revs a little longer.

Focused on the US

Although Kia seeks to mirror coupés from its German rivals, the US market will be key for the Stinger’s success, so although it is offered in rear-wheel drive, it also comes in all-wheel-drive format – the one that will be the biggest seller, and the one underpinning Irish models.

In terms of driving dynamics, Kia’s weak point has been its handling and steering. The suspension set-up on its larger cars has tended towards soft and bouncy over sharp and responsive, and the steering has been too light and imprecise. The set-up worked well for US buyers who put comfort above all other factors, but in Europe the critics – including this reporter – have always regarded it as a weak point for Kias.

Now, under the eye of Albert Biermann, its head of vehicle testing and high-performance development, things are starting to improve. Biermann brings major motoring credibility to the brand, having previously been boss of BMW’s M division, overseeing the development of iconic sports saloons like the M3 and M5. Kia says it spent a lot of time working on the Stinger at Germany’s famous Nürburgring, where the firm now has a permanent test centre.

The result is the best-handling Kia we’ve driven. For the first time the steering wheel feels properly connected to what’s going on down at tarmac level.

Sales will be relatively low in Europe, with most in the United States. Some motorists are tired of the usual German trio of Audi, BMW and Mercedes-Benz, but they are just as likely to turn to Lexus or Jaguar for an alternative as they are to turn to a high-end newcomer such as Kia.

If nothing else, the Stinger’s appearance in showrooms and Biermann’s arrival at the Korean brand should make European car executives pay serious attention to Kia’s intent.