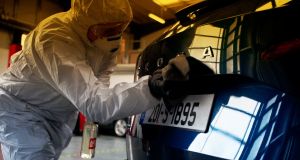 Skoda is one of a number of major car brands using a portable device by Sanity Systems, which uses ozone gas to sanitise vehicles

As the motor trade prepares to reopen aftersales departments from next Monday, many dealers are increasingly frustrated that sales operations cannot restart at the same time.

“Motor retailing lends itself to social distancing in a way that a lot of other retailers don’t, because in terms of footfall there is not a huge number of people visiting showrooms,” Brian Cooke, director general of the Society of the Irish Motor Industry (Simi) said. “So we would like to see sales opening on May 18th as well and we feel the measures that have been put in place already means the industry is ready to go.”

The concern, says Mr Cooke, is that dealers will miss out on sales for the July registration period, which normally represents 20 per cent of the year’s sales.

Stephen Gleeson, managing director of Hyundai Ireland, said: “I would appeal to someone in Government to consider that 10 or 20 potential customers per day who want to buy a car visiting a main dealer in a 4,000 or 5,000sq ft showroom is the very definition of social distancing and allow car sales to open alongside car repairs on May 18th.”

Paddy Magee, country director of Renault Ireland, said: “Dealers have kitted out the showrooms and the size of our showrooms are ideal for social distancing. I was in the local Centra this morning and there are more people in the average corner shop than there would be in a showroom in a week. It doesn’t make sense.”

There is also uncertainty over whether all dealerships can reopen for sales on June 8th as many believe, or if the larger operations must wait until June 29th, in line with the wider lifting of restrictions detailed in the Government’s guidelines.

Either way, the new car market is expected to be significantly down and dealers will struggle. According to Mr Cooke: “This is going to be a bad year, even if we do get back in the next few weeks, to have some sort of July registration sales period. Car hire is going to be gone for a start and then there is the wider economic impact of the crisis.”

Mr Cooke estimates sales could fall to 12,000 this July, from 25,000 the same month last year. “In terms of sales that is still over €100 million in tax revenue for Government and over €300 million in revenue, so it’s significant economic activity and would help some dealers cover their fixed costs.”

He said that if the opening is too late then there is inevitably going to be job losses as there isn’t going to be a new car sales period until January next year, by which time we will also be facing into Brexit, alongside stricter emissions regulations (known as WLTP) impacting on the price of all new cars.

“While there have been calls for a temporary reduction in VRT or a cut in the VAT rate from 23 per cent to 21 per cent, any such moves are likely to prove very difficult to introduce before July as any such changes would require a Finance Bill to be passed by the Oireachtas, which is currently awaiting the formation of a new government and the appointment of the Taoiseach’s nominees to the Seanad.

Even though they will be able to do business, dealers also face additional costs under the new restrictions. Mr Magee estimates that even when service departments reopen next week, they will be working at 40 to 50 per cent of normal capacity, because of the safety measures they have to put in to protect staff and customers.

Simi has issued a detailed 40-page document to dealers with guidelines for forecourts, showrooms, workshops and offices. Franchised dealers have also introduced extensive signage and markers in showrooms, along with issuing personal protective equipment for staff. Skoda Ireland brand director John Donegan said that its dealerships will have temperature monitoring systems in place at doorways for staff and customers, while many of the workshops are using video messaging services to show customers the repairs or parts replacement needed on a vehicle and to get agreement on work, rather than have the owner physically come into the garage.

Skoda is one of a number of major car brands using a portable device by Sanity Systems, which uses ozone gas to sanitise vehicles. Initially developed in Italy a decade ago, it is now being used on Garda and Health Service Executive vehicles as well as prisons and doctors’ surgeries in Ireland, according to the company.

Sanity Systems says that experiments carried out on the Sars virus – which is 80 per cent similar to the coronavirus in genome sequence – showed that ozone gas is effective in eradicating 99 per cent of infection. “It takes 22 minutes to completely sanitise a vehicle,” said Robert Kane, sales director for Ireland.