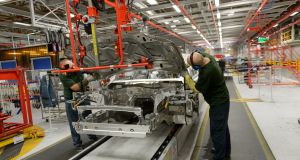 Jaguar Land Rover only has enough parts in its UK factories to last the next two weeks because of the impact of the coronavirus on the carmaker’s supply chain.

The company’s chief executive, Sir Ralf Speth, reportedly said parts have been flown into the country from China in suitcases.

In Coventry to launch a self-driving electric vehicle dubbed Project Vector, he said JLR’s factory in China would reopen next week.

But he admitted uncertainty over whether the company would have enough parts to maintain production in the UK.

“At the moment, we are safe and we have checked everything for the next two weeks and we are also safe for the very first week in the production in China, starting next week,” he told Sky News at the National Automotive Innovation Centre on Tuesday.

“We don’t know how long it will take until the supply chain in China comes on stream again.”

He also said the company may never recoup the sales lost because of the deadly coronavirus outbreak that’s stifled production and kept customers away from dealerships in one of the company’s biggest markets. “At the moment, we don’t see anything happening in terms of demand in China.”

Automakers have shuttered plants to help contain the spread of the virus, which broke out in Wuhan, known as China’s “motor city”.

JLR, a unit of India’s Tata Motors, gets about 20 per cent of its sales from China.

While its facility in the city of Changshu near Shanghai is expected to reopen next week, the impact of parts shortages could affect the company’s UK production. Its plants have only about two weeks worth of supplies left, Mr Speth said. The outgoing CEO said he’s “cautiously optimistic” that the UK and European Union will agree to a deal that allows for free and fair trade following Britain’s exit from the bloc. Carmakers depend on the complex supply networks that require parts to cross borders multiple times before a car is finished.