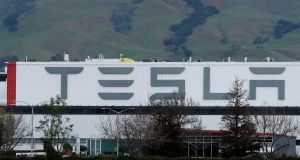 Tesla chief Elon Musk on Saturday sued Alameda County, home to the electric carmaker’s Fremont manufacturing plant, and threatened to withdraw Tesla from California altogether after being denied a request to restart production halted because of coronavirus.

Mr Musk filed an 18-page lawsuit asking a federal judge to allow him to reopen his factory, after tweeting that he would move Tesla’s Palo Alto headquarters and potentially shut all manufacturing in Fremont.

“Frankly, this is the final straw,” the billionaire said on Twitter on Saturday morning.

“Tesla will now move its HQ and future programs to Texas/Nevada immediately. If we even retain Fremont manufacturing activity at all, it will be dependen [SIC]on how Tesla is treated in the future. Tesla is the last carmaker left in CA.”

The mayors of both Fremont and Palo Alto took to social media to voice their support for Mr Musk. Mayor Lily Mei of Fremont said she was “growing concerned about the potential implications for our regional economy” from stay-at-home orders, adding that she “strongly” believed some companies should be able to reopen with the same “strict safety” practices that essential businesses have deployed.

The message from Mr Musk came in response to a fan-podcast tweet, which said that Alameda “doesn’t think Tesla should reopen until June 1”. Ross Gerber, an investor and longtime Tesla bull, then said it was “time for a lawsuit”.

Moving locations would incur major costs. Following an expansion in 2016, Tesla’s site in Fremont is nearly 10m square feet on 370 acres of land. Tesla started operations there in 2009 after acquiring it from NUMMI, a GM-Toyota joint venture. It is home to more than 10,000 employees and is Tesla’s only US site for building the Y, S and 3 models.

In the legal complaint, Tesla alleges that Alameda County unlawfully forced the closure “of businesses that the state government had ordered could remain open because they are federally defined ‘critical infrastructure’”.

It further alleges that the county “lacks statutory or other legal authority” to threaten jail time or significant fines for anyone who does not comply with the orders.

Mr Musk added in a tweet: “I’m not messing around. Absurd & medically irrational behaviour in violation of constitutional civil liberties, moreover by *unelected* county officials with no accountability, needs to stop.”

A spokesperson for Tesla did not immediately respond to a request for clarification, but a company blog published on Saturday said Tesla had “started the process of resuming operations”.

Earlier in the day Mr Musk had told his 33.9m followers: “Please voice your disagreement as strongly as possible with @AlamedaCounty.” He also encouraged Tesla shareholders to file a class-action lawsuit against the county.

The issue came to a head after the electric car pioneer asked employees to return to the Fremont plant on Friday. Alameda responded by issuing a statement saying Tesla did not meet its requirements for beginning production and “must not reopen”.

Mr Musk countered that Tesla’s Shanghai plant had already proven it could reopen with policies in place to protect employees.

“Tesla knows far more about what needs to be done to be safe through our Tesla China factory experience than an (unelected) interim junior official in Alameda County,” he added.

Lieutenant-governor Dan Forest of North Carolina took the opportunity to tweet at Mr Musk, saying his state featured “low taxes, best business climate in US and people who want your business”. – Copyright The Financial Times Limited 2020