BMW’s new flagship will be a fully-electric 7 Series 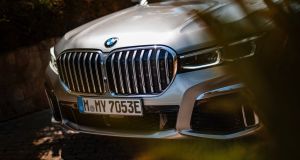 The new 7 is currently undergoing testing and development, and BMW’s chairperson, Oliver Zipse, has already confirmed that the next-generation Munich flagship will go electric

BMW looks set to ditch its mighty 6.6-litre V12 petrol engine in favour of massive electric motors when it brings the new 7 Series luxury saloon to the market.

The new 7 is currently undergoing testing and development, and BMW’s chairperson, Oliver Zipse, has already confirmed that the next-generation Munich flagship will go electric. “The next generation 7-Series will be available with four drivetrains: petrol, diesel, plug-in hybrid and fully electric,” said Zipse during the BMW’s annual press conference. “All drivetrains will be based on a single architecture. And the top, most powerful 7-Series will be fully electric.”

Currently, the most powerful 7 Series is the M760Li, which features a massive 6.6-litre V12 turbocharged petrol engine developing 600hp and 850Nm of torque. That’s enough to propel the big limo to 100km/h in just 3.6secs, and on to a limited top speed of 250km/h.

The rumour mill currently has it that BMW is working on three fully-electric versions of the new 7 Series, which may be badged as i7. The top-spec model, the one to replace the V12, will probably be badged as i7 60, and will have two electric motors developing a combined 650hp, and more than 1,000Nm of torque. Those will be fed by a 120kWh battery stack which, according to the website BMW Blog, will be good for a one-charge range fo around 645km.

Mirroring the conventional engine lineup of the 7 Series, there will be two other electric models, with commensurately less power - an i7 50 and an i7 40. That base model will probably be rear-wheel drive only, and develop around 350hp, with the 50 having four-wheel drive and around 450hp. The versions will have battery packs sized between 80kWh and 100kWh, depending on their specification.

Other variants of the new 7 Series will include a brace of plugin-hybrid versions, badged 740e and 750e, with that latter one being a higher-performance model, using an uprated version of the 740e’s straight-six petrol engine, and a bigger electric motor, for a combined 500hp. Conventional 730d and 740d diesel models will also be offered, as well as a 740i petrol.

Does this mean the end for the amazing BMW V12 petrol engine? Sadly, it probably does, although BMW might choose to give it one last roundup in an ultimate version of the 8 Series Coupe. It will also live on in Rolls-Royce models. While Rolls is known to be developing electric models, it’s not yet seen as a priority for the brand, whose small sales numbers mean it passes largely under the radar of emissions legislation.

The new electric 7 Series won’t be alone in providing battery-powered luxury. Mercedes is currently prepping its own EQS, an all-electric sister car to the S-Class, and that will reputedly be the first electric model to be massaged by Merc’s AMG high-performance brand - expect in excess of 600hp for that. Jaguar, too, is working on an all-electric luxury saloon - the new XJ will be sold only with battery power, and thanks to a technology sharing agreement between BMW and Jaguar, will use some of the same electric motor and battery technology as the new 7 Series.

An extra 88,000 vehicles took to our roads last year, according to new figures