A favourite of families, taxi drivers and gardai, the comfy four-door saloon is set to return 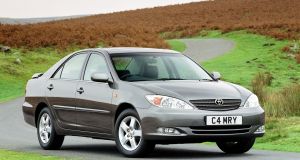 Garda Traffic Corps drivers, taxi drivers, and the rest of us who just crave a bit of outside-lane comfort can at last rejoice, as Toyota Ireland has confirmed that it’s bringing the legendary (if that’s quite the right word…) Camry nameplate back to the Republic. The big four-door saloon will go on sale in early 2019.

The new Camry will share its chassis and hybrid powertrain with the new Lexus ES executive saloon, which means it will have the same flexible TNGA (Toyota New Generation Architecture) underpinnings, and a 2.5-litre four-cylinder petrol engine, backed up by a hybrid electric transmission.

Sales of the Camry in Ireland came to an end in 2006, with the end of production of the XV30 model, but by then its tax-heavy 2.4-litre engine had already made it a rather minority interest. Thanks to being a hybrid, the new model should have Co2 emissions of around 106g/km, so will be a far more efficient tool for businesses and fleets, assuming that the Government ever gets around to letting business users claim back VAT on petrol, as well as diesel.

Thankfully, and in spite of competition from sporty-to-drive German marques and models, Toyota is already talking of a different focus for the Camry. In fact, it’s already claiming the class lead in areas such as “quality, durability and reliability, quietness and ride quality.”

The return of one old favourite means the departure of another, though. With the Camry coming back, and no more diesel engine production for Toyota, that means that the Avensis is not going to get a direct replacement. Instead, the new RAV4 will take up much of the sales slack in that department, with the Camry covering those who fancy something a touch more luxurious, but don’t want to go the ‘Full Lexus’ as it were.

Although it’s been absent from Irish shores for more than a decade, the Camry has been doing fine without us - annual sales are still above the 700,000 mark globally, and Toyota claims that it’s the best-selling big saloon in the world.