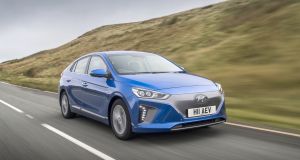 The Ioniq comes in three flavours: full electric, a regular petrol-electric 1.6-litre hybrid version and an upcoming plug-in hybrid version Hyundai is hoping will deliver 50km of full-electric driving before resorting back to hybrid mode 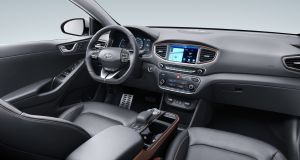 The cabin, while spacious, has been engineered with weight-saving as a priority. 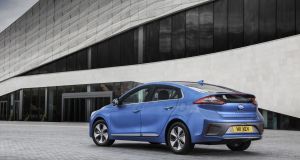 Ioniq is Hyundai’s long-awaited response to the electric age. It comes in three flavours: full electric with an ambitious claimed range of 280km; a regular petrol-electric 1.6-litre hybrid version; and an upcoming plug-in hybrid version the firm is promising will deliver 50km of full-electric driving before resorting back to hybrid mode.

The trio are a timely addition to the brand’s range, demonstrating once more that the Koreans are no longer mere imitators. They aspire to be innovators.

So what’s the Ioniq like? Engineers were clearly focused on efficiency above all else. The styling comes straight from the wind tunnel, where aerodynamics overrule aesthetics. Hyundai staff talk of coupé styling, but it’s not any sleeker than dozens of other lozenge-shaped family cars currently gracing forecourts. And the grey plastic nose on the full-electric version couldn’t be regarded as a styling feat.

The cabin is fine for family motoring with decent legroom in the back, but it has been engineered with weight-saving as a priority. As a result materials not in direct eyeline, seem a little below par.

Despite a shared styling and name, these are three quite distinct cars. And it’s not just a matter of plug sockets.

During a recent in-depth test event for European car of the year, we had the opportunity to pit the hybrid against the electric variant.

While the hybrid is more agile and engaging, thanks in part to its better rear suspension setup, the all-electric version is noticeably quicker in a straight line. An official 0-100km/h time of 10.8 seconds for the hybrid doesn’t match the 9.9 seconds for the full-electric version when in sport mode, or even the 10.2 seconds in normal mode. And those figures don’t do justice to the immediate torque surge you get when you floor the accelerator in so-called “Sport” mode.

However, it does mean more bodyroll. Clearly, despite the coupé references, this is not a car you throw into corners - and it tends to understeer - but thanks to the impressive acceleration of the electric powertrain you can power out of bends faster than the hybrid.

And so we come to the elephant in every electric car garage: range anxiety.

As with official fuel economy figures, the motoring world has long embraced the Trumpist era of “post-truth”. Officially the electric Ioniq delivers 280km on a single charge. That’s a figure measured in specific test conditions. A more realistic range cited is 210km in the summer and 170km in the winter, when the use of heaters and lights drain more battery power. That said, those are more impressive ’real-life’ figures than its rivals.

Initially for our test time in Ioniq we stuck to the city limits and over 32km of driving the range dropped by just 30km.

Out on the motorway, it does start to trickle away quicker but there was no dramatic drop during a few hours of driving on the M1. It steadily counts down in tune with the distance covered.

For me, that’s the most important point when driving an electric car. In the past I’ve driven electric cars where the on-board computers promise 100km in range but after few minutes at motorway speeds the figure drops dramatcially, below 60km.

It’s this sort of uncertainty that leads to the much-publicised range anxiety. The remedy for anxiety is trust and the more time I spent behind the wheel, the more faith I had in the Ioniq’s promised range.

Another reassuring feature of the Hyundai is a Sat-Nav map that shows how far it reckons you will get on your current charge and also identifies all the public charging points. It’s only when you see it on the map you realise how far could potentially get on a single charge. And also just how many charging points there are across the island.

The Ioniq also recoups as much energy as possiblefrom regenerative braking. There are three stages of brake regeneration on Ioniq, oddly controlled by a pair of steering wheel paddles that in other cars would be for changing gear.

In the lowest setting there is no discernible difference, but by level two the car starts to slow as you lift off and the brake lights come on. By level three the braking is much more sudden when you lift off and in general traffic this is a one pedal car, for you’re unlikely to ever need to touch the brake pedal.

In terms of charging, the Ioniq takes 12 hours on a regular domestic socket, just over four hours on the AC fast charging units usually installed at the owner’s home and it also comes with a socket for the DC fast-charging public connections.

Offering three eco-flavours is a smart move by the Korean brand. Of the three the hybrid is the best to drive, and is competitively priced, coming in at €31,995, a €1,555 price advantage over the hybrid benchmark Toyota Prius.

At €28,495 the full-electric Ioniq is slightly more expensive than its arch-rival, the Nissan Leaf, though it does claim a greater range and better warranty.

However, the upcoming Ioniq plug-in hybrid will be the best of the bunch if it delivers on a suggested 50km range on full-electric before reverting to ‘regular’ hybrid, though price will be key. I suspect we will see it close to €35,000, which is a lot for a mid-sized family car.

If you are doing high mileage then, frankly, I still think a diesel i40 would do be a better buy than any of these. It’s also better value, starting at €26,495.

I can see how full-electric is a viable option for many suburan commuters. Certainly we need to be reassured with the rollout of more charging points across the nation - and we need to stop electric car owners from hogging public charging points all day.

The full-electric is not the sort of car you buy after a 10-minute test drive: it sounds really trite, but an electric car is a lifestyle choice. And if you regularly find you’ve forgotten to charge your smartphone and it runs out of power, an electric car is not for you.

Potential buyers need to work out their daily and weekly mileage and then compare it to the realistic range of the electric Ioniq. In doing so, I think a lot of motorists will be pleasantly surprised to find the electric Ioniq fits their needs.

The Ioniq isn’t going to cause the same market upheaval Hyundai has achieved with the Tucson. Yet this trio represents a statement of intent from a brand: the Koreans want to be regarded as innovators not imitators. In that regard, it’s an impressive statement of intent.

Verdict: A strong message of intent but pricing will limit its ability to lure customers from the likes of the Nissan Leaf.