Post-Jeremy Clarkson, post-Chris Evans, the car show has a new cast of three 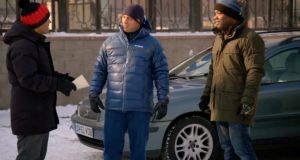 Top Gear returned with a slimmed down team of Chris Harris (left), Matt LeBlanc (centre) and Rory Reid: and it may just have snuck ahead of the bloated Grand Tour, presented by Jeremy Clarkson, Richard Hammond and James May

Earlier this year, The Grand Tour, Amazon’s online motoring show with the over-hyped, over-blown and over-paid trio of Jeremy Clarkson, Richard Hammond and James May, made its internet debut in a blaze of publicity and an opening sequence which cost millions to shoot. Coming hot on the heels of a generally disliked season of Top Gear, revived, post-Clarkson on the BBC, it was generally assumed that the familiar trio, with their new Amazon Prime Video budget would flatten any attempts by the BBC to rebuild the global success that was Top Gear from 2002 to 2015.

The Grand Tour though, for all its undoubted budget and stunning visuals, was a bit of a let-down. Yes, the extra cash was up there on screen but the jot of Top Gear as was, was watching three friends bicker, argue, and laugh about cars and life in general. With The Grand Tour’s production values to the fore, there seemed less room for that, and in general most of the stuff that was good about it was good too about Top Gear.

Top Gear is now back again, a new seven-week season just starting this Sunday evening and some drastic pruning has taken place. Gone is Chris Evans, his over-excited and under-whelming performances having been generally derided and gone, thankfully, too is Eddie Jordan and his apparent inability to read nor deliver a scripted line with any conviction. In situ are former Friends star Matt LeBlanc, long-time motoring journalist Chris Harris and former tech writer Rory Reid, who should without question be considered Top Gear’s best “find” since the Clarkson era.

With just the three on presenting and filming duty, and with a mere three segments in an hour long show, you could be forgiven for thinking that the legendary BBC cost cutters have been at their tasks and that we were going to be left with the fag-ends and off-cuts.

Actually, no. Chris Harris’s opening piece, hurling the ludicrous 1,000hp+ Ferrari LaFerrari FXXK around the famed Daytona race track in Florida was just terrific, beautifully shot, well presented and with the bonus “hot lap” ending that will have had petrolheads’ blood pressure and adrenaline levels rising. Nothing much new in the format, perhaps, but well filmed and generally well done.

The in-studio sequences with X-Men star James McAvoy as guest were perhaps not as slick as they should have been, but the arrival of the Toyota GT86 as the “Reasonably Fast Car” seemed like a decent evolution of the star-in-a-car formula, and the fact that the track is back to its simpler pre-Chris-Evans self was welcome.

The Kazakhstan piece, though, was just terrific. For a start, in this second-go-round of the post-Clarkson era, there was humour aplenty but none of it at the xenophobic expense of locals nor national history. No-one cracked a Borat gag, for instance. Second, the chemistry between the three presenters is coming along nicely – not quite effortless yet, but amusing and familial enough to pass muster. LeBlanc is enjoyably deadpan and genuinely funny when he wanders off script; Reid has an infectious schoolboy enthusiasm while Harris is simply insanely competitive. And keen to indulge in trivia. Enjoyably so.

The fact that they were testing three ultra-high-mileage clunkers in a reliability challenge was well-constructed, not least because there’s nothing like a little bit of under-dog rooting to get an audience on your side. The crashes and minor incidents were recycled from the Clarkson days, but with less nastiness, and more of what seemed like genuine camaraderie. No-one looked likely to punch anyone, for instance.

Then, at the last, a touch of poetry. LeBlanc’s little homily about the space race of the 1950s and 1960s having kicked off technological developments that led to more reliable cars was, perhaps, a little tenuous, but it gave the programme an excuse to visit the famed Soviet and Russian space launch site at Baikonur.

As the trio watched a Soyuz rocket blast itself upwards into the darkening heavens, on a pillar of escape-velocity explosions, there was a hint of profundity, of cars being part of a greater technological world of which space rockets are the pointy pinnacle. And then LeBlanc cracked a David Hasselhoff joke, bringing us literally and figuratively back down to Earth.

New, new Top Gear has another six weeks to convince us that there is a life beyond Clarkson, beyond Evans, and that enough people still care about watching fast cars on a Sunday evening that there’s mileage in the concept. On the basis of this first episode, and with the caveat that all such things need time to bed in and gel together, the smaller, lighter Top Gear may just have snuck ahead of the bloated Grand Tour.