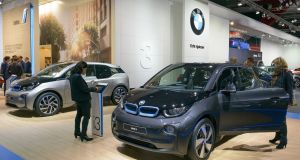 The new coalition Government is still not in a position to announce when car dealers will be given an exemption on the ending of electric vehicle grants for business buyers.

There was a good deal of criticism of the previous government’s decision, last October, to end the electric vehicle (EV) grant for businesses. While private buyers can currently receive a €5,000 grant from the Sustainable Energy Authority of Ireland (SEAI), business buyers initially saw that reduced to €3,800, and then saw it removed entirely last year.

That especially affected car dealers, who have to pay in full to register a new EV demonstrator car. Many in the motor trade complained bitterly about a decision that seemed to fly entirely in the face of the general promotion of electric motoring.

Since when, proposals to give car dealers a waiver, allowing them to claim the €3,800 grant again, were put forward, and approved. The final sign off was held back, though, because of the delays in putting a new Government together, and the paperwork has still not been completed.

A spokesman for the Department of Communications, Climate Action & Environment told The Irish Times: “The Department is aware that motor dealerships have been unable to apply for a grant towards the purchase of demonstration passenger cars since October last year. Demonstration cars play an important role in demonstrating the latest in EV technology to consumers and encouraging the uptake in their use. In recognition of this, the Department has been working with the SEAI to explore the provision of a dedicated grant for the purchase of EVs by approved motor dealers for use as demonstration cars. A decision, outlining the details of the grant, will be announced shortly.”

For car dealers, shortly cannot come soon enough. Not only is there a job of work to be done convincing buyers to switch to electric power, but electric car sales are pretty much the only bright spot in the current Covid-affected sales gloom and the chance to put new buyers behind the wheel this year is dwindling every day. On top of which, the lack of ‘ex-demo’ models of new electric car is putting off those buyers who, on tighter budgets, are rightly looking for battery bargains.

“The absence of franchise dealers being able to obtain the SEAI grant for EVs makes it more difficult for second hand electric vehicles to be sold in the Irish market” Donal Geoghegan, dealer principal of Frank Keane Volkswagen Liffey Valley, said. “Similar to regressive taxation, it unfairly disadvantages the second hand consumer compared to the consumer who can afford to buy a new one in the first place, and also reduces the overall number of EV’s that should be making it onto our roads. Electric vehicles are currently too expensive for the majority of consumers which is partly why the overly ambitious Climate Action Plan to have one-million EVs on the road by 2030 is already set to fail. There needs to be a consistent approach to ensuring the availability of the grant and access to EV’s for everybody.”

Consistency does indeed appear to be the key, as experts agree that, when it comes to EV grants and incentives, constantly tinkering and changing them is massively counter-productive.

“Inconsistency is a problem” Erki Figenbaum, chief research engineer at Norway’s institute of Transport Economics told The Irish Times. Norway is one of the most successful of all countries at convincing its citizens to switch to electric cars, and the not-so-secret-secret is to have major incentives which are consistently applied.

“I think if you want to make changes, they should be advertised earlier, maybe you say two years from now we will start changing the incentives, not just doing it overnight in the national budget” said Figenbaum.

“Then it gets very difficult for businesses to plan how many electric vehicles do they plan on selling in Ireland. It’s very difficult to get a long-term business commitment when the framework is unstable. There is a cost, you know, to the auto importers to introduce EVs into the market. It costs them money. They have to provide services, train sales staff, maintenance staff, they maybe need to buy specialist equipment, install chargers, and so on. These are investments that need to be recovered. If the policies change frequently, then the situation becomes unstable, and maybe people won’t invest as much as they would have done if things were more stable.”

‘My mother is a controlling, manipulative, narcissistic person'
10