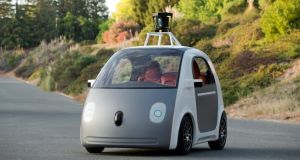 Humans might be the one problem Google cannot solve. For the past four years, Google has been working on self-driving cars with a mechanism to return control of the steering wheel to the driver in case of emergency. But Google’s brightest minds now say they cannot make that handoff work anytime soon.

Their answer? Take the driver completely out of the driving. The company has begun building a fleet of 100 experimental electric-powered vehicles that will dispense with all the standard controls found in modern automobiles. The two-seat vehicle looks a bit like the ultracompact Fiat 500 or the Mercedes-Benz Smart car if you take out the steering wheel, accelerator, brake and gear shift. The only things the driver controls is a red “e-stop” button for panic stops and a separate start button.

The car would be summoned with a smartphone application. It would pick up a passenger and automatically drive to a destination selected on a smartphone app without any human intervention. Google won’t say if it intends to get into the car manufacturing business or simply supply technology to carmakers, but it says there are plenty of possibilities if it can persuade regulators to allow cars with no drivers. One potential use: driverless taxi cabs.

In an interview at Google’s headquarters here, Sergey Brin, a Google co-founder who is actively involved in the research program, said the company decided to change the car project more than a year ago after an experiment in which Google employees used autonomous vehicles for their normal commutes to work.

There were no crashes. But Google engineers realised that asking a human passenger - who could be reading or daydreaming or even sleeping - to take over in an emergency would not work.

“We saw stuff that made us a little nervous,” said Christopher Urmson, a former Carnegie Mellon University roboticist who directs the car project at Google. The vehicles will have electronic sensors that can see about 600 feet in all directions. Despite that, they will have rearview mirrors because they are required by California’s vehicle code, Urmson said. The front of the car will be made from a foamlike material in case the computer fails and it hits a pedestrian. It looks like a little bubble car from the future, streamlined to run by itself - a big change from the Lexus SUVs that Google has been retrofitting the last few years with self-driving technology.

The new Google strategy for autonomous cars is a break from many competing vehicle projects. Mercedes, BMW and Volvo have introduced cars that have the ability to travel without driver intervention in limited circumstances - though none completely eliminate the driver.

That feature, which is generally known as Traffic Jam Assist, allows the car to steer and follow another vehicle in stop-and-go highway driving at low speeds. In the Mercedes version, the system disengages itself if the driver takes his hands off the steering wheel for more than 10 seconds.

Volvo said that by 2017 it planned to have the cars in the hands of ordinary consumers for testing in the streets of Gothenburg, Sweden, where the company has its headquarters.

In the interview, Brin acknowledged those advances, but said they were incremental. “That stuff seems not entirely in keeping with our mission of being transformative,” he said. Google’s prototype for its new cars will limit them to a top speed of 25 miles per hour. The cars are intended for driving in urban and suburban settings, not on highways. The low speed will probably keep the cars out of more restrictive regulatory categories for vehicles, giving them more design flexibility.

Google is having 100 cars built by a manufacturer in the Detroit area, which it declined to name. Nor would it say how much the prototype vehicles cost. They will have a range of about 100 miles, powered by an electric motor that is roughly equivalent to the one used by Fiat’s 500e, Urmson said. They should be road ready by early next year, Google said.

The current plan is to conduct pilot tests in California, starting with ferrying Google employees between buildings around its sprawling corporate campus here. Laws permit autonomous vehicles in California, Nevada and Florida. But those laws have generally been written with the expectation that a human driver would be able to take control in emergencies.

Google executives said the initial prototypes would comply with current California automated-driving regulations, issued May 20th. They will have manual controls for testing on California public roads. In the future, Google hopes to persuade regulators that the cars can operate safely without driver, steering wheel, brake or accelerator pedal. Those cars would rely entirely on Google sensors and software to control them.

So where might the driverless cars be used besides at Google’s offices? Last year, Lawrence D. Burns, former vice president of research and development at General Motors and now a Google consultant, led a study at the Earth Institute at Columbia University on transforming personal mobility. The researchers found that Manhattan’s 13,000 taxis made 470,000 trips a day. Their average speed was between 10 and 11 mph, carrying an average of 1.4 passengers per trip with an average wait time of five minutes.

In comparison, the report said, it is possible for a futuristic robot fleet of 9,000 shared automated vehicles hailed by smartphone to match that capacity with a wait time of less than one minute. Assuming a 15 per cent profit, the current cost of the taxi service would be about $4 per trip mile, while in contrast, it was estimated, a Manhattan-based driverless vehicle fleet would cost about 50 cents per mile.

The report showed similar savings in two other case studies - in Ann Arbor, Michigan, and Babcock Ranch, a planned community in Florida. Google is one of the few companies that could take on a challenge like that, said John J. Leonard, a Massachusetts Institute of Technology (MIT) roboticist. But he added: “I do not expect there to be driverless taxis in Manhattan in my lifetime.” Brin said the change in Google’s car strategy does not mean that the company is giving up on its ultimate goal of transforming modern transportation. “Obviously it will take time, a long time, but I think it has a lot of potential,” he said. “Self-driving cars have the potential to drive in trains much closer together and, in theory, in the future at much higher speeds. “There is nothing to say that once you demonstrate the safety, why can’t you go 100 miles per hour?”The New York Times News Service

We’ve got new lockdown rituals, but man, I miss the old ones
9