First drive: Can the new BMW 5-Series retain its lead over rivals?

In a competitive market, how does the new BMW 5 Series measure up against its rivals the Volvo S90 and Mercedes E-Class? We take it out on the road to find out 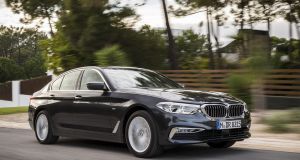 The new BMW 5-Series: even fans will have to look twice to spot the difference. 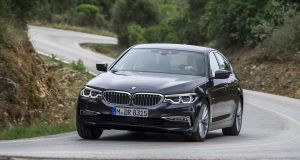 The new BMW 5 Series: the secret sauce in this successful recipe remains its driving dynamics 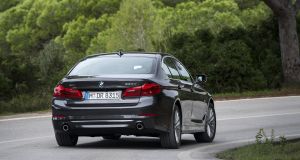 The new BMW 5 Series: the handling and cornering defies the laws of physics 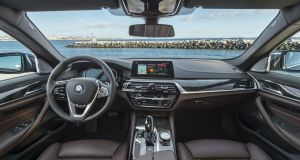 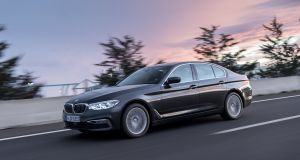 The new BMW 5 Series: it delivers on the road but does it do enough to see off its rivals?

As if Brexit, Trump and smaller Toblerones were not enough, cabinet ministers and company bosses now face a monumental motoring dilemma.

The executive car market is the hottest segment for 2017. First up, the radical new Volvo S90: the boldest statement from the Swedes in decades. Then Mercedes rolled out the new E-Class, overtaking its flagship S-Class in terms of innovation and refinement. And that’s before you consider the litany of impressive cars already out there: the Audi A6, Jaguar XF and Lexus GS.

Now comes the latest iteration of what has been the leader of the executive class for more than a decade: BMW’s 5 Series.

The 5 Series range makes up 55 per cent of BMW sales. Since the first generation arrived in 1972, 7.9 million have been sold. Initially it struggled against the iconic status of Mercedes in this segment. If you were moneyed then your motor was a Merc. It was simple. By the 1980s the 5 Series had found its niche: if you were both moneyed and enjoyed motoring, you opted for the BMW. Whereas Mercedes offered a plush sofa on wheels, BMW consolidated its position as the driver’s car in this class. For the last decade or so it has been the benchmark for executive cars.

Seven engine variants are going on offer in the new car. Starting from February 11th we will have four iterations on Irish forecourts. In diesel there is the 520d 2-litre 190bhp and the 530d 3-litre 265bhp. In petrol there is the 530i 2-litre 252bhp and 540i 3-litre 340bhp. A plug-in hybrid will arrive in March as the 530e iPerformance with a 50km electric-only range. A full electric model is scheduled for 2021. But you can read more of that and BMW’s big electric innovations from my colleague Michael Taylor.

BMW has played it surprisingly safe with the styling. For a company that earned a reputation for being quite radical in design, the new 5 Series looks rather staid. Car fans may remember the Chris Bangle revolution, and the controversy over the designer’s styling and features such as the iDrive controls. In contrast, the output from BMW at present is positively pedestrian.

There are subtle differences with the outgoing model, but buyers may be relying on the new 171 registration plate to catch the eye of neighbours and work colleagues.

Our test drive started out on the usual motorway run, where you get the chance to tick the usual boxes for commuter-friendly executive cars. Comfortable? Tick. Refined? Tick. Spacious? Let’s leave that box empty for a moment. Legroom in the back is fine while the boot is actually 30 litres larger, at 530 litres. BMW has taken the impressive interior from its flagship 7 Series and squeezed it into the 5 Series’ shell. The controls are more driver-orientated but you get the same 10.2-inch touchscreen, the same functionality and the same high-end finish. However, it also means you get a very chunky central console that divides driver and passenger. By wrapping the car’s interior around the front seat occupants it can make it feel a little more cramped than it is. Just ask Lexus owners.

BMW seems eager to increase the take-up of four-wheel-drive versions of the car, branded xDrive. For a model that has rear-wheel drive in its DNA, it’s a noteworthy strategy shift. I admit I didn’t want to like it.

The 5 Series chassis has been redesigned rather than replaced – which is perfectly fine as it was the secret sauce in this car’s success to date. So why add weight with four-wheel-drive?

Well, I was proved wrong on the road: the xDrive system is a real star. Behind the wheel of a 530d with xDrive was a real eye-opener. On hilly roads that swung sharply left and right every 50 metres, the 5 Series took on a life of its own. Forget family saloon – this was sports car handling. BMW has shed an average of 100kg from the last generation, despite all the extra tech gadgetry on board, and it really delivers. Unlike with any of its rivals, there is simply no mid-corner wobble, yet it soaks up any of the bumps and potholes along the way without the usual shuddering bang that knocks out your fillings. You can throw the 5 Series into corners and it just won’t concede to the laws of physics.

Part of this is undoubtedly down to the four-wheel drive but another ingredient is the firm’s active steering system, which turns the rear wheels slightly to aid cornering. We’ve driven it on other BMWs in the past and hated it, but on the new 5 Series it really shows its worth. It does take a little from the steering feel but the trade-off works.

It’s the one driver assistance system worth buying. There are a host of others on offer with the 5 Series, but I couldn’t recommend them from the options list unless it’s simply to impress friends. The driver assistance system, for example (BMW is eager to avoid the term self-driving for obvious reasons) lets you take your hands off the wheel for up to 30 seconds. When active cruise is engaged that means the driver is a passenger in the car. It operates at speeds up to 210km.

However, between weaving in its lane like a drunk on the way home from the pub as it constantly self-corrects its position and the need to take back control every 30 seconds, it’s clearly not the real deal. When it comes to our autonomous motoring future, what we have here is the equivalent of the flickering silhouette images shown by John Logie Baird in 1925. It is a momentous step in the right direction but a long way from the HD tablet viewing of today.

Other systems on offer include the ability to remotely park the car into a space using the keyfob, a smartphone app that gives a live 360-degree image of your parked car and surroundings, and a car-to-car connection system that alerts you to problems ahead courtesy of messages from other BMWs on your route. And in keeping with servicing the needs of those busy executives, the voice system will read out your emails and let you dictate responses as well. The car will also sync with your calendar to not only alert you to meetings but also pre-programme the sat-nav. It even sends a message to your smartphone when it thinks you should leave based on the latest traffic information.

One final point about the car’s increasingly long list of tech features. The system controls on the 5 Series can now be operated by physical buttons, iDrive dial, voice activation, gesture control and the touchscreen. BMW engineers say it’s to cater for all tastes. I fear that’s a cop-out. The controls – and the car’s interior – would be a lot less cluttered if its engineers made the sort of decisive call expected of its prospective executive buyers. Time for BMW to get off the fence.

Anyway, if tech is your thing, then you’re better spending your money in an electronics store than a BMW dealership. None of this gadgetry is why you buy a BMW 5 Series. Its niche was and is as a driver’s car. The essence of its offering has not changed, which is perhaps why the chassis and styling are evolutions.

Overall, the ride quality in the 5 Series is pretty flawless, on a par with the Mercedes E-Class and better than what’s on offer from Volvo, which seems tuned more for comfort than agility. Combined with the wonderfully linear power delivery from the 3-litre diesel, it’s hard to see the 5 Series losing to rivals when it comes to driving fun. While we didn’t get a chance to try the all-important 2-litre diesel, figures of 4.2 l/100km (67mpg) and 109g/km are very impressive.

First impressions from two days’ driving the new 5-Series suggest BMW has not done enough to give this car an outright lead over its opponents. It retains the key driving traits that made it so special for decades, while keeping pace with rivals in other areas.

For now it’s too close to call. And that’s why I’m disappointed with the new car. I have always had a fondness for the 5 Series. It’s partly linked to a lifelong love of M5s, partly to childhood memories of my father’s first BMW, a yellow 5 Series.

Yet this latest iteration hasn’t pushed forward enough to retain its outright lead over some really impressive rivals. As the world order looks to be upended, is another global upheaval on the cards? In the words of well-heeled consultants who can afford to drive such cars, further research is required. But that in itself suggests BMW hasn’t done enough.

Cleaning up public transport emissions should be priority
8

Fish sauce: the secret ingredient that makes everything taste better
9

Can you move house now, and how will it work?
10