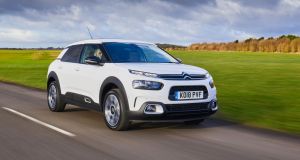 New C4 Cactus has some original traits, even if it has lost some of its distinctive identity by abandoning the plastic “air bumps” that used to blister out from the bodywork. 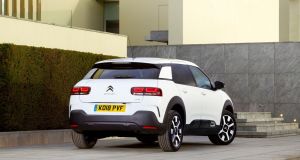 New C4 Cactus is distinctly a crossover, in the guise of the original Cactus model launched several years ago to critical acclaim 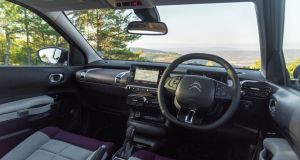 A sagacious subeditor is cross about crossovers. Considering the variety and range of the mongrel hatchback-SUVs in our new car best buys guide, he reckons we’re just confusing the readers. He’s got a point about the way the new car market has been sliced and diced by the car makers.

In bygone days you simply had a cheap hatchback, a family saloon, a luxury liner and a sports car. These days there are the equivalents for each of these in the crossover category alone. The slicing-and-dicing of this type of crossover class merely reflects its popularity.

The top two best-selling new cars on the Irish market this year are crossovers, and they account for five of the top 10 best selling models overall. So every car firm, presents a crossover, in every price bracket in the market.

In fact, with so much focus on the crossover these days, it’s likely the days of big name models such as the Ford Mondeo and Toyota Avensis may be numbered. Similarly, last decade’s fad for boxy people carriers in various sizes has transformed into the seven-seat crossovers they want, not because they come looking for them.

In the near future, every mainstream category may fall into what we term today a crossover. With Rolls Royce entering the SUV market and Lamborghini struggling to meet demand for its supersport crossover, it doesn’t take a highly-paid market analyst to work out where things are going.

Thanks to the work of a small team of executives, led by the impressive chief executive Linda Jackson, design director Alexander Malval, and product planning boss Xavier Peugeot, there is new life in the double-chevron brand.

That last name should catch the eye, for Xavier is the great-great grandson of Eugene, who co-founded Peugeot as a bicycle and car maker. The one-time adversary is now Citroen’s owner and together they fight the good fight for France.

Dividing the market between the two was difficult for the first few years, thanks in part to a strategy that seemed to have left the brand with dreary, cheap remodellings of lacklustre Peugeots.

The differences have become much clearer now. Peugeot is stylish mainstream, Citroen is quirky, a little off-beat and serving a trend towards comfort and design rather than racy performance. It is playing heavily on the heritage of models such as the 2CV and the original DS. In its day Citroen was the most innovative brand on the market. Arguably it was Citroen that gave us the world’s first hatchback, with the Traction Commerciale.

And just like innovators in other sectors – and the Teslas of today – it struggled to keep the cashflow coming in, so ownership has changed hands a few times until it ended up with PSA.

With so much revolution and upheaval in the motoring air, Citroen isn’t seeking to reinvent the car. There is too much uncertainty in the air, too many false dawns and budget-burning dead ends.

It doesn’t have the budget to lead the way in new engine technology or autonomous cars. What it can do is be different in its own fields of interest. And that’s what we have with the latest C4 Cactus.

This is now the French firm’s entrant in the mainstream hatchback market, pitched against the likes of the VW Golf and Ford Focus. Yet it is distinctly a crossover, in the guise of the original Cactus model launched several years ago to critical acclaim.

In keeping with the new principles at the brand, the new C4 Cactus has some original traits, even if it has lost some of its distinctive identity by abandoning the plastic “air bumps” that used to blister out from the bodywork.

The look may be a little more mainstream, but in true Citroën style, the new car is offering something a bit different. For potential buyers, comfort is the watchword. Or “ultra-comfort” to be precise.

It points to three features of the new Cactus to justify its case: advanced comfort seats, a new suspension with progressive hydraulic cushions, and improved acoustic systems to quieten outside noise.

First to the seats and the marriage between Citroën and the world of soft furnishings takes another step closer with the firm’s new pews. It’s not often we write about car seats, but these wide armchairs are so soft and supple they could easily reside in a smart city apartment or an Ikea showroom.

To give an example of the importance seating comfort plays in the new car, several months ago we were asked to take a couple of hours out of a trip to a motor show to visit a presentation on the new seats and test prototypes out on the road. It’s the first time we have ever been asked to attend a presentation specifically on car seats. We even got to meet one of the guys whose full time job is working on designing and perfecting Citroen’s front seats.

Overall, the interior cabin is a world away from the sort of hard shiny material and hard plastics of rivals and a major part of its pitch as the comfort choice on the mainstream market. Instead, we get the squishy comfort some might recall from 1970s and 1980s Citroëns.

They combine well with the attempts to give the car’s interior a livingroom feel, and all it’s really missing at this stage is a few throw cushions and tea candle holders along the dash.

The car also retains some nice interior touches from the outgoing Cactus, such as the strap door handles.

Sadly for a firm that plays the “history of innovation” card its touchscreen control system, plonked centre stage on the dash, is an old-school, clunky affair that lacks any haptic feel. In an age of smartphones it feels very discount.

The interior retains its admirable touches, though headroom in the back is tight for tall passengers and bootspace is comparable with most rival hatchbacks, although a high lip makes loading unnecessarily more of a chore.

Clearly playing the comfort card, and talking up the firm’s heritage with models such as the DS, suspension and ride comfort is crucial. Here we have the French firm’s new suspension with progressive hydraulic cushions.

Citroën’s prowess in comfort suspension traces back to the work of Paul Mages. During the second World War Mages, a Citroën employee with no formal engineering training, developed the concept of combining air and oil in a suspension to create a new level of softness.

Fast forward a few years and his hydropneumatic suspension changes the motoring world. Patents are filed and his innovation is fitted to the DS. Suddenly cars seem to float along over the bumps, ruts and potholes. The system was licensed to other firms, most notably Rolls Royce for its Silver Shadow, Maserati and even Mercedes-Benz.

This new system is not as advanced as Mages’ work: what we have here is a normal spring-and-damper system, but with the traditional solid rubber “bump-stops” that control the suspension’s movement in large impacts, replaced by a hydraulic “cushion”.

That cushion’s job is two-fold – on normal, small bumps it allows the suspension more freedom of movement, with the spring and damper working together but separately to control the car’s motions.

That structure is also key to the new suspension’s workings – it’s 20 per cent stiffer thanks to the use of adhesive bonding between chassis panels and this allows for a much stiffer structure with no weight penalty.

On the road in the C4 Cactus it’s at its best in badly surfaced city streets and at speeds of up to 60km/h or so. However, it doesn’t really lose its composure at speed in twisting roads.

You do feel the sideways body movement in corners and it’s not as sharp in the bends as benchmark rivals such as the VW Golf or Ford Focus, but in the trade-off for much greater comfort, it doesn’t mean you will be left leaning into bends.

The final pitch is for cabin quietness courtesy in part to features such as an acoustic windscreen. In reality it’s not the library reading room Citroën would have you believe, and low engine noise does encroach in the cabin, along with wind noise from the side mirrors at speeds over 80km/h.

Three engine options are offered on the new car in Ireland. In petrol terms it features the peppy little 1.2-litre three-cylinder in 110bhp, or the older 82bhp. There is also a 1.6-litre diesel with 100bhp on offer. Our test car was the 110bhp with six-speed manual and it managed the right mix of power and fuel economy, with a claimed consumption figure of 4.8 l/100km (58.9mpg) that we actually managed to come close to achieving.

Emissions of 107g/km means it carries an annual motor tax bill of €190. It’s got the right mix of small engine eagerness combined with decent consumption, but it doesn’t match the pace of VW or Ford rivals.

Yet playing the comfort card as a key trait against rivals who claim sharper driving dynamics would seem to be a smart move for a firm with Citroen’s heritage, not to mention a large mainstream audience who will never get to appreciate dynamic driving characteristics on their daily commute.

Prices start at €18,120 for a 75bp petrol version, but it is more there to lure buyers to the showroom.

With prices for the best-buy 1.2-litre 110bhp version starting at €23,120, it is not simply a discounted value proposition any more.

The C4 Cactus is quirky enough to catch the eye of people looking for something different, economical enough to fit many family budgets, and comfortable enough to win favour with those considering making the move to crossovers from the traditional format.

Even subeditors who long for simpler times.

Verdict: Delivers on comfort and quirkiness if not driver dynamics

Can I put up a fence and force my neighbour to spend on a survey?
6

How TikTok turned my five-year-olds into proto-teens
10