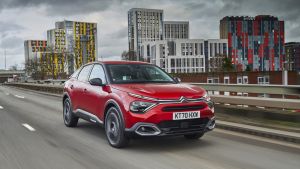 The Citroën C4 was a finalist in this year’s Car of the Year and rightly so, but the engineers could have been braver. Photograph: Matthew Howell

Citroën got lost down a few Irish culs-de-sac in recent years, but the new C4 should mark a return to the main road.

A new – or rather, renewed – Irish distributor is taking back the wheel, selling a design-orientated, comfort-focused range of models that now include electric variants, suggesting better times ahead.

From April 1st, Citroën will be managed here by Gowan Motor Group, a division of the Maughan family-owned conglomerate that already has Peugeot and recently took on Opel. With such close ties to Stellantis, the parent of both of those brands, could the addition of its Fiat, Alfa and Jeep brands be far behind? But that’s for another day.

Right now, the focus is on reminding Irish motorists of the Chevron brand and what it is all about. In essence, comfort and style. Those are pretty strong cards to play for family buyers who have no need for “sporty handling” on the school run. If you’re motoring needs centre on a glorified taxi driver and weekly grocery delivery van, then your interest in a car’s cornering ability mainly focuses on not flinging children across the back seats or breaking eggs in the boot when you tackle a roundabout.

Citroën, then, should be something of a family hit. Its small cars have certainly set a welcome template. The C3 is a stylish supermini, with lovely, retro styling touches to its interior, mixing the brand’s rudimentary roots with features lifted from the sitting room department of a soft furnishing store.

The French brand’s decision to target comfort isn’t just a marketing gimmick: it has been taken seriously by the engineers. During the C3 development, for example, I got to see first-hand the level of detail that went into something as seemingly simple as seat cushions. A team of engineers works solely on mastering the right level of cushioning support for rumps of all shapes and sizes. The end result, often taken for granted, is admirably comfortable.

Back in the glory days, Citroëns seemingly wafted down the road – the only drawback was that things got a little choppy in the bends. Then, in the early days of this century, the brand lost its way. It seemed to abandon comfort and style in favour of blandness and mediocrity.

But thanks to a series of engineers and under the direction of former design chief Alexandre Malval, the brand got its mojo back.

With the C3, Citroën delivered a supermini that mixes comfort and quirky charm.

Now, a new C4 lands on the market, hoping to carry forth those characteristics into the hypercompetitive family hatchback market. It’s not somewhere that Citroën has done well in in the past; up against the likes of the Volkswagen Golf and Ford Focus, the French brand usually floundered.

Yet with so many buyers eager to break from routine and look at crossovers, now is the chance for Citroën to shine. And in some ways, it has delivered.

By opting to be neither hatchback nor crossover, I initially feared its lack of commitment was symbolic of a brand that didn’t know what it wanted. But when you see this car in the metal, the halfway-house approach seems to work.

While some may wonder about power output, it’s unwarranted. It is a remarkably restrained performer with a surprising amount of low-revolution power

Unlike the ill-considered coupe crossovers, the worst of both worlds by demanding buyers sacrifice the practicality of a crossover but also the sportiness of a coupe, this C4 mixes plenty of practicality with very smart styling. It’s a great-looking car.

It is the same battery pack that’s in other models from the Stellantis family of brands, including the Peugeot 208 and Opel Corsa. And that’s because the new C4 shares the same platform as those superminis, only it has been extended out to support a family hatch body frame.

That delivers the necessary legroom, front and rear, and you can certainly get two adults in the back without a problem. Thanks to a sizeable scallop in the rear, headroom is not an issue either, despite the coupe roofline. That roominess is also reflected in the boot, where it can match rivals such as the Golf and Focus.

The good news continues in the cabin, where the finish has certainly matured, losing some of the fun quirks from the recent Aircross models, but in return delivering a far more premium feel. A regular issue with the French company’s touchscreen systems – slow processing speeds – does seem to have been addressed as well. And if you still aren’t happy with that touchscreen, a new feature is a little tech shelf that’s available for the front-seat passenger. This pops out of the dash to let you securely prop an iPad or other tablet, so passengers can email, Zoom or catch up on Netflix, leaving the driver to tackle the road ahead.

Even the lethargic and jerky efficient automatic transmission (EAT) has been improved. We have always loathed this feature from the French car brand, but it’s much better than before, though still nowhere near a match for Volkswagen’s smooth, dual-clutch, direct-shift gearbox.

Which brings us to life on the road. Our test car was the 1.2-litre petrol 130bhp with the latest EAT 8-speed automatic transmission. While some may wonder about the power output, it’s an unwarranted concern. It is a remarkably restrained performer with a surprising amount of low-revolution power on tap.

Just a little aside; while all the hype is on electric these days, credit should go to the engineers who have developed a suite of three-cylinder petrol engines that are delivering stellar performance and refinement across several brands.

The C4 delivers comfort and practicality in the car, while carrying some very smart styling touches on the outside. Is it the comfort cruiser that Citroën promises? Nearly, but not quite.

While it may have admirably managed to bridge both the hatchback and crossover world in terms of design, when it comes to driving, the C4 tries to be both a soft and supple comfort choice while also delivering sharper handling. This is a challenge too far.

Riding on the car maker’s hydraulic dampers, the new C4 certainly soaks up the bumps and washes out the usual array of speed bumps and potholes every Irish motorist encounters on their daily drives. Yet the overall ride felt firmer than I was expecting.

The dampers also prove quick to stiffen when you encounter a bend. But it still tends to be nose heavy when you arrive to a corner at speed, while the steering feel could be a lot sharper. Yet, hot hatch agility is not what’s expected from Citroën these days.

My gripe about this car, then, is that it could have played the comfort card far stronger. And returning to the cabin, while the feeling is much more premium, it seems to have abandoned some of its quirkiness and charm in order to fit in with its more sterile, serious rivals.

Citroën needs to realise the market is awash with regular family car brands, particularly in the hatchback and crossover set. We don’t need another Skoda, Seat, VW or Ford, we need something different. Even if it means you take a little heat for being less agile than the rest, if you make that sacrifice in the name of delivering better comfort, there is surely a market out there.

The C4 delivers on many fronts and offers a promising restart for its new Irish distributor, which has the experience and Irish market expertise to deliver on the brand’s promise. It was a finalist in this year’s Car of the Year and rightly so. And offering it in petrol, diesel and electric certainly covers all the bases. The engineers just could have been a little braver.