The MX-5 boasts old-school charm, but the 2 Series Coupe is a sweetheart 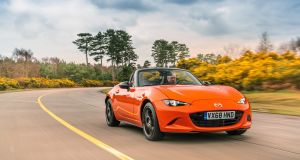 The sports car and coupe market is a broad church, stretching all the way from this, the relatively affordable MX-5, all the way up to big-banger stuff like the Porsche Cayman and Ford Mustang. That we consider the littlest, cheapest car of the lot the best says a huge amount about both Mazda itself and the way it goes about building the MX. It just keeps it simple, really. Although it has become more sophisticated of late, with a new 2.0-litre engine option, and some clever infotainment and electronic systems, it’s basically still an original Lotus Elan at heart - light in weight, twin-cam engine up front, beautifully balanced steering and snick-snick gearshift in the middle, and power going to the rear wheels. Basic 1.5-litre is all the car you’ll ever need, but we’d understand if you fancied the upgrade to the 2.0. RC targa-roof coupe looks intriguing, but you’d be better off with the simpler, lighter, soft-top.

It won’t be around much longer, the 2 Series Coupe and that’s the bad news. The good news is that although the next-generation of BMW 1 Series will switch to front-wheel drive, the next 2 Series will retain its north-south propshaft and keep the power going where it’s supposed to - the rear wheels.

We still probably have a year or so to enjoy the current 2 Series, though, so get one while you still can. It’s a genuine sweetheart of a car, the closest thing we have in the modern age to an original eighties E30 3 Series. Relatively light, relatively simple, it has just enough space in the rear seats and boot to be practical. You can get one with as little as 136hp in the 218i, or you can get a super-frugal 218d if you need to keep the running costs down. You should really just get the M2, though. It lacks the unfettered lunacy of the larger, more expensive M3 and M4, but is in real terms just as fast, with delectable chassis control and an intoxicating six-cylinder howl. You’ll lose your licence, but it’ll be worth it…

The amount of hand-wringing over the Boxster and Cayman’s switch from six-cylinder to four-cylinder power was something to behold. Porsche-philes and professional car critics alike turned the social media airwaves blue with invective about how the new 718 turbo flat-four engine wasn’t worthy to wipe the old six-cylinder’s exhausts, and all purely because of its exhaust note. It’s true - the new engine doesn’t sound as good as the old one, but it’s hardly appalling. In fact, it’s rather an interesting sound; a mixture of tuned original Beetle and mid-nineties Subaru Impreza Turbo. It’s also bloody quick, even if you don’t go for the 2.5-litre S or GTS models with their extra power. You should, though. Impressive though the basic 2.0-litre is, the GTS is a paragon of modern sports cars, with exceptional steering feel and precision, and a totally unflappable, yet involving, chassis. Boxster or Cayman? Boxster - not only is it nice to have to roof down, its chassis settings are also a little more pliant.

The Mustang’s a funny one. It kind of straddles both the sports car market and the supercar end of things, considering that its most basic version, the 2.3-litre turbo EcoBoost, is basically a modern-day Capri, but its most expensive version, the 460hp Bullitt special edition, can take the fight to much faster, more expensive metal. The thing is, of course, that it’s really neither sports car nor supercar, but actually a muscle car - a square-jawed Connecticut Yankee in Arthur Guinness’ court. There are many, many flaws when it comes to driving a Mustang. The interior is rental-car cheap. The handling is only good up to a point, after which it becomes unruly. The styling verges on comicbook parody and it’s both thirsty and very expensive to buy. None of which will bother you a jot once you get behind the wheel. It’s big, brash, loud, and fun - exactly what a Mustang is supposed to be. EcoBoost turbo is the sharpest version to drive, and plenty quick enough, but you’ll want the V8…