Citroën’s C3 has the flair, while Seat’s Ibiza is a common sense choice 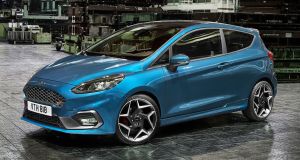 It’s taken a while, but the Fiesta has wormed its way sufficiently into our affections to unseat our previous favourites in this class, the Citroen C3 and Seat Ibiza. While we still have reservations over the styling and the interior, the Fiesta is a truly impressive car. It does the basic stuff very well - that entry-level 1.1-litre engine is revvy, but economical and there’s decent space in both the cabin and boot. The thing with the Fiesta, though, is that it’s fantastic to drive and that goes equally for the most basic model or for the utterly brilliant 190hp ST hot hatch model, a car that makes almost all other fast machinery fell over-sized and over-priced. Active, which is supposed to mimic an SUV, sounds daft but is surprisingly appealing. Was it the ST that swung our Fiesta opinion? Pretty much, yeah.

If one can fairly describe Citroen as a maker of cars that can be a touch hit and miss, then we can certainly describe the C3 as an unalloyed hit. Taking the styling cues of the (slightly) larger C4 Cactus the C3 actually proves to be a much better car than the source of its inspiration. And not just because it has proper rear windows that wind up and down. Unlike the Cactus, in which you always feel like you’re driving less car than what you’ve paid for, the C3 feels like an upgrade. It looks very smart, with those double-decker lights and the distinctive ‘Airbump’ door protectors, and if the cabin is very Citroen in some ways - ultra-comfy seats, door handles that look like luggage straps - then it’s slightly less challenging than it might have been. Basic 1.2-litre petrol engine is all the powerplant you’ll ever need, although the turbo version does give the C3 some surprising outside-lane performance. Citroen still offers diesel models, if for some reason you need to drive to Jupiter and back.

If the C3 is all about flair, and the Fiesta is all about fun, then the Ibiza is all about common sense. That, perhaps, does the small Seat an equally small disservice - after all, the company would prefer you to think that the Seat brand is all about throbbing Latin passion. There’s a bit of that, right enough; the Ibiza is enjoyable to drive, has sweet steering, and if you get the top-spec 150hp 1.5-litre turbo model, then there’s more than sufficient power on tap. That’s not why we like the Ibiza though. We like it because it’s a really well-made, likely very reliable, smart-looking, and hugely spacious small family car. In fact it’s so roomy that it makes you question the need to upgrade to the larger, more expensive Leon (which is presumably not what Seat wants you think at all). All of which, by the way, can be equally said about the Volkswagen Polo, but the Polo is pricier by far.

Its price, of €24,990 for a basic version, would have you think that the Zoe comes from the next class of hatchback up, but once you sit inside, you soon realise that this is really a rival to Renault’s own Clio, as well as the rest of the cars in the small hatchback class. Slightly narrow and full of very cheap plastic, the Zoe’s interior is probably its biggest let-down. The point is, of course, that you’re paying for the battery. With that 41kWh ‘4.0’ battery on board, Renault claims that the new WLTP emissions and range test gives the Zoe 317km between charges, which is pretty impressive. As with all electric cars, it’s also ultra-smooth and quiet too and pretty brisk. It’s a shame the Zoe doesn’t demonstrate the same driving dynamics as its Clio brother, but even in electric dreams, I guess you can’t have everything.