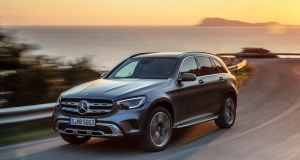 The mid-size Merc just gets better and better with age, and a mid-life facelift which should be hitting showrooms about the time that you’re reading this will bring with it an improved diesel engine offering (switching from the noisy old 2.1-litre unit to the E-Class’ smoother 2.0-litre) and the addition of a plugin-hybrid diesel model, which should keep your local Green Party councillor a little more happy. The cabin gains many of the updates applied to the C-Class saloon (not surprising, given that the C and the GLC share most of their structure and components) so you get a bigger ten-inch infotainment system and new (optional) digital dials. There’s also mild-hybrid petrol power if you fancy, and the option of the storming GLC63 AMG version with its astonishing 4.0-litre twin-turbo V8 engine. That’ll keep things interesting on the school run… Avoid the Coupe version, though - it just looks weird.

BMW’s mid-size SUV has come on leaps and bounds with this, its third-generation model. The first version, launched in 2003, was something of a joke - cramped, expensive, and deeply ugly. The second-gen fixed the looks (a bit) but didn’t really move the game on. This version, though, is deeply impressive. At last, BMW seems to have found a styling language that works for the X3 and it’s finally a car you could reasonably describe as handsome. Sharing components with the 5 Series means that the cabin is also, finally, a decent place in which to while away a traffic jam, with lovely quality and some nice styling touches. Space-wise, the X3 is now about the same size as the original 1999 X5 - just as well, considering how expensive the X5 has become - so there’s plenty of room for an expanding family. Best of all is the way it drives, with sharp steering and a chassis that seems to take no notice of the fact that this is a tall, heavy SUV and instead just gets on with doing its best BMW sports saloon impression. 2020 will see the launch of a crucial model - the all-electric iX3 - but you can already buy a plugin-hybrid X3 30e.

Well, come on. If you want to have a family-friendly school-run bus, and can afford the necessary folding paper, why wouldn’t you have one with the storied and starry-eyed badge of Porsche on the bonnet? Of course, there are a few compromises to make… First and foremost, in spite of a recent update, this is actually quite an old car, based on the same platform as the original Audi Q5 (which launched in 2009). That also means it’s pretty chunky in the weight department. There’s also no diesel model this time around, only a choice of petrol turbos in four-cylinder and V6 forms, so it’s going to be pretty thirsty (although hybrid, and eventually fully-electric models, are coming). And of course, it’s far from cheap… All of which kinda disappears when you spin the steering wheel for the first time and realise that, yes, a family SUV can be made to go, stop, steer, twist, and turn like a proper, pukka, Porsche. The Macan is an utter delight to drive, and even if it is feeling its age a touch, that makes it a rare thing in the SUV world.

The F-Pace arrived in a blaze of glory when it was first launched, but seems to have faded a little since then. Certainly, there are no longer the (literal) queues out the doors of Ireland’s handful of Jaguar dealerships, with eager punters waiting their turn to put down an F-Pace deposit. Jaguar is learning the harsh lesson that SUVs are fashionable items, bought by fickle customers. The thing is, though, that it’s still a really good car. Can it match the Porsche Macan for handling sharpness? No, but there’s not what you’d call a gulf of ability between the two cars. The interior (and exterior, for that matter) can look a touch too plain on basic models, but a judicious raid of the options list will have that sorted in a hurry. Basie 2.0-litre diesel engine is too noisy for its task here, although performance is good. Better by far to upgrade to the twin-turbo model, or even the V6 diesel, although that one does feel a little short of brakes at time, thanks to the extra weight. Manic supercharged V8 SVR model is good fun, but you’ll need shares in AppleGreen to justify the fuel cost.