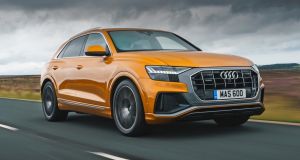 This really shouldn’t be a good thing. After all, does the world really and truly need a hulking, big, two-tonne-and-change ‘coupe’ version of the equally-massive Q7, with an over-inflated price tag to match? In fact, the Q8 should be thoroughly undermined by the fact that if you really want a high-quality, sharp-to-drive, luxury German SUV then you could buy a VW Touareg and have all the same mechanical bits with enough change left over to buy a Golf GTI as well. And yet… The Q8 is just beguiling, in a way that it really shouldn’t be. Yes, it looks as aggressive swole as someone who has far too close a relationship with creatine powder, but underneath it’s a pussycat, with exceptional refinement, and tremendous comfort. The interior is a thing of beauty (although, in fairness, you can have all of the same bits in an Audi A6 for half the price…) and within the confines of the laws of physics and how they act upon a massive, luxury, SUV, it’s even pretty good to drive. Really, we ought to hate the Q8. But we don’t. In fact, we love it. Only engine option for now is a 3.0-litre V6 TDI, which even net of diesel hatred is a truly great engine, but other options are in the pipeline.

With the X5, we thought that the whole BMW Big Grille thing had reached its zenith, and actually that we’d kind of gotten away with it. Then came the X7. It’s a love it or loathe it look and frankly we’ve grown to love it.

Let’s not fool ourselves, no one wants to be subtle in a luxury SUV. It’s big, brash and bold for a reason. It’s supposed to evoke the idea of strength and tank-like sturdiness, and that’s what comes across in spades in the X7 SUV.

Inside you get the luxury refinement of the 7 Series but with proper space for seven adults - and that’s not just for a quick school run. We travelled over 100kms in the third row without complaint during the first day with this car.

Arguably it’s not as sharp as its smaller siblings but it’s only by a matter of degrees. The space makes up the difference. Coming in two flavours - petrol or diesel - the latter is clearly the one to choose for Irish audiences.

Merc’s big new SUV has a distinct price advantage over most of its rivals, although to be fair that’s in part because BMW hasn’t yet rolled out the four-cylinder versions of the X5. The GLE starts with a four-cylinder engine - the 300d version of Merc’s four-pot diesel is a revelation here; smooth and powerful, and not giving much away in refinement terms to BMW’s six-cylinder diesels. It’s also good to drive, the GLE. Not as sharp in the corners as the Audi nor the BMW, but solidly impressive, with a very comfortable ride quality which means your passengers will probably thank you for choosing it over its German rivals. For the first time, the GLE now comes with the option of seven seats, and there are mild-hybrid petrol engines, and plugin-hybrids too, coming shortly. In the meantime just revel in that gorgeous interior, which basically uses a super-sized version of the A-Class’ MBUX dashboard to great effect.

The big Land Rover has three image issues which it must surmount if it’s to find a place in your heart or on your driveway. First is the fact that it’s a pricey LR product that’s not a Range Rover - many can’t see past the appeal of the posher brand. Second, that rear-end styling, with the offset front numberplate, is deeply divisive. Trust us when we say it’s a grower, and after a while it starts to look pleasingly distinctive. Third, there’s Land Rover’s unlovely reputation for reliability issues. Quality has improved at Solihull, but the jury’s ultimately still out on that score. Still, in its 30th year, the Discovery still has massive appeal - it’s huge, and hugely spacious, smooth and refined on tarmac (and actually pretty decent in corners too), and utterly unstoppable off-road in a manner that most rival products simply aren’t. 2.0-litre 240hp diesel is all the engine you’ll need, but the V6 model is tantalisingly smooth and powerful.