It’s a dwindling market as more buyers move to crossovers, but there are still families who need the space 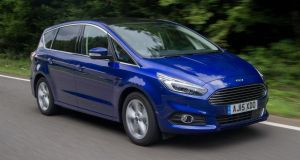 MPVs are all-but a dying breed, essentially wiped out by the insane popularity of large 4x4s and SUVs. Which is just daft, really, not least because there are no comparably-priced SUVs with seven seats that can hold a candle to the S-Max when it comes to sheer interior space. The S-Max may be unfashionably egg-shaped but because of that it’s cavernous inside, with space for seven full-sized passengers, and even with a modicum of luggage space behind the third row of seats. Being based on the same chassis as the Mondeo means that it’s also hugely enjoyable to drive, proving once and for all that buying an MPV doesn’t mean you’ve given up on your youth. Quality levels are also good and we also happen to think it’s quite handsome. Buy one soon, if you want one, as Ford is likely to give the S-Max the bullet before long.

If the Volkswagen Golf is a straightforward, sensible hatchback then the Touran is basically the same, but it’s been given a good talking to about straightening out its ways and sent for a stint at Sensible Academy - The School That Makes You More Sensible. I guess that’s the Touran’s problem - because it has that straightforward, upright, mini-TGV shape, you just think that it’s going to be a dullard. But while it’s hardly a ball of fire (no GTI or R version, of course…) it is one of those cars that grows and grows on you the more you drive it. The chassis is stable, sure-footed, and not without a capacity to entertain. The Interior is what gets you, though - roomy, comfortable, versatile, beautifully made, and even with a great view out through all that glass. To spend time with a Touran is to realise just what a good concept the MPV was right from the get-go, and to also realise what a waste of space most SUVs are when it comes to being a truly practical, useful, family car.

For all those who think that an MPV can’t be stylish, even desirable, take a look at the Renault Scenic. Take a look, especially, at the seven-seat version which, with its extended roofline and subtly altered styling, looks very much like a lightly shrunken Espace (a model which, sadly, we don’t get to buy with right-hand drive anymore). Then look at the stance, set off as it is by standard (yes, standard) 20-inch alloy wheels. Honestly, this is a great looking car, MPV or no MPV.

The only problem is that this falls apart a bit when you get inside. The cabin looks impressive, but get closer and you’ll find too many cheap plastics, and there’s disappointment in the fact that the rear seat is now a split bench, rather than three individual seats. The Scenic is also only OK to drive, but perhaps that’s par for the course with MPVs. It’s another model being sunk beneath the tide of SUVs, so grab one while you still can.

We’ll group these three models together because they’re basically the same car, with the same van-derived body, and the sam choice of 1.2-litre petrol engines or 1.5-litre diesels. The choice basically comes down to which badge you’d prefer, and which dealer is going to give you the best trade-in deal. Oh, and there are some interior differences too, with the Peugeot version gaining that brand’s high-instruments, small-wheel layout, if that’s your bag. More importantly, you can have five-or-seven-seat versions, and you can choose from two wheelbase lengths so that cabin space can stretch from vast to sorry, I can’t hear you back there. It’s in terms of boot capacity that these cars really score, though. The smallest versions have 770-litres of luggage space, while if you get a long-wheelbase model and fold all the seats flat, you’ve got 4,000-litres to play with. IKEA, here we come…