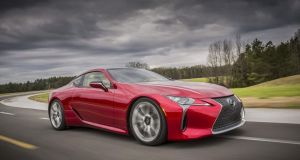 I know that many of you will not be entirely on-board with the current Lexus styling ‘language’ - all gaping maw and sharp-edged lines - but surely even the doubters will agree that the LC coupe is just a stunning, beautiful car. It’s beautiful underneath too. In spite of being made mostly of steel, with a smattering of aluminium, it’s actually stiffer in its structure than the Ferrari-priced V10-engine, carbon-chassis, Lexus LF-A supercar of old. The hybrid powertrain is pretty remarkable, too. Shared with the LS saloon, it combined V6 turbo power with battery assistance, and a fearsomely clever e-CVT gearbox for stunning acceleration, mixed with Band B emissions. The cabin is just as striking as the exterior, and has the usual unimpeachable Lexus quality levels. It also has the annoyingly fiddly Lexus infotainment system, but we’re more minded to forgive that here, as the driving experience is so good. No, it’s not as agile as a Porsche 911, but it’s not a million miles away, and as a GT car - a way of covering vast distances in supreme comfort - it’s pretty hard to beat. Non-hybrid V8 model isn’t available in Ireland, but if you can get your hands on one, it’s a wonderful concoction, that sounds like a 197os racing machine when you rev it out.

The old Conti GT was big, hefty, slightly unwieldy at times, and suffered both from being too closely related to the VW Phaeton saloon, and too popular with Premiership footballers. This new Continental GT can’t fix the image issue, but it has worked hard on almost every other area. The chassis is now shared with Porsche, so the weight (and there is considerable weight, still) is lower down and further back. The styling, similar at first, is actually considerably more sleek than that of the old one, and if the 6.0-litre W12 turbo engine is hardly in keeping with concerns over just how swiftly we’re destroying the planet, then it does compensate, in part, by being sonorous, unseemly fast, and turbine-refined. The cabin, arguably, marks the biggest step forward - the wood, chrome, and leather are all there but here too, at last, is a decent sat-nav system, digital dials, and the sort of connectivity you’d expect for this kind of price tag. The rotating centre console - which switches from plain wood, to infotainment touchscreen, to analogue dials at the flick of a switch, is just wonderful.

To call the DB11 controversial is putting it mildly. Taking Aston Martin’s classic, naturally-aspirated V12 engine and not only reducing it from 6.0 to 5.2-litres, but adding turbochargers? Sacrilege of the highest order, surely? Well, maybe not as it turns out. Switching to turbos gives the Aston the kind of power boost that it needed to take on Ferrari and Porsche, and thankfully the big hairdriers strapped to the engine don’t quell the noise - this engine still howls and snarls with sheer drama. It’s also bloody fast. Well, it would be with 600hp and relatively little body weight to throw around, but what you don’t expect is quite what a pussycat it’s also going to be. Ex-Lotus man Matt Becker has got the Aston chassis tuning down to a tee now, and so the DB11 can be thrilling and involving one minute, but easygoing and relaxed the next. 510hp V8 version pretty amazing too, and doesn’t suffer for its lack of cylinders. The styling, with that distinct ‘turret’ roofline might not be Aston’s best work, and the cabin still has too many cheap bits on display (in spite of Aston being able to raid the Mercedes parts bin these days) but this is still a dramatic, and impressive, GT.

In two words: Expecting you.

Yes, you could (possibly should) buy a new 992-model 911. It’s the classic sports car, now with supercar performance and one of the most recognisable silhouettes in motoring. But hang on, you’ve got kids to fit in, a dog to carry around, and the general clutter and detritus of life with which to deal. Plus you live in town and want to be environmentally responsible. Well, there’s always the Panamera Turbo S E-Hybrid…

The Panamers has evolved into a truly handsome, striking car and the current model also benefits from an interior that feels more like that of a futuristic fighter jet. The twin-turbo 4.0-litre V8 engine has 550hp, which you think would be enough, but the plugin hybrid system boosts that to 680hp which is beyond hilarious. Acceleration in this car feels genuinely physics-denying, as if you could out-run a marauding black hole. Yet, charge it up and you can swish around for 40-odd silent, saintly, electric kilometres. All that and the power to beat Ferraris. Quite the combination.