VW’s Golf still in the race though, while Mazda 3 is gorgeous alternative 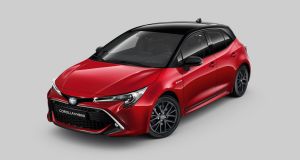 It had to happen eventually - someone had to unseat the VW Golf (although VW will hit back with a new eighth-generation Golf next year) but I’m not sure Toyota was the name most people had in mind. In bringing back the Corolla name for its mainstream five-door hatchback, Toyota was ramping up the name recognition, but possibly burdening its new car with a name associated with worthy-but-dull predecessors.

It needn’t have worried. The new Corolla looks sharp - far better as an estate or hatchback than as a slightly dowdier saloon - and drives even sharper. The chassis is balanced and responsive, the steering sharp and reactive. The hybrid system (and the new Corolla Hybrid models are vastly out-selling the sole ‘normal’ petrol derivative) is smoother and quieter than before, and impressively economical too. Faults? Rear seat space and boot space in the hatch are nothing to crow about, and the infotainment system is a step (at least) behind rivals, but that’s about it.

The new Corolla isn’t the only Japanese hatch in the ascendent - Mazda’s new 3 is looking pretty peachy too. Looks especially factor into it, as frankly it’s rather hard to think of another five-door family hatchback that’s actually better looking than this. It’s close to Maserati-handsome, but for middle-class money. The cabin is good too, with very high quality fixtures and fittings, but kids will probably find the back seats a bit dark and claustrophobic. New 2.0-litre mild hybrid petrol engine is the one to go for, as it’s smooth and punchy and has decent fuel economy. If economy matters to you above all else, though, there’s also a new 1.8 diesel which will beat the 60mpg barrier in real-world driving. Handling and ride are just superb, with sharp steering and genuine fun to be had behind the wheel. A star in the making.

It might be shortly due for replacement, but the Golf can still hold its head high amid the ever-improving opposition. After all, when you’ve almost done a Hoover, and become the generic shape (if not quite name) for the whole segment, you’re obviously doing something right. The Golf also offers a massively broad spread of powertrains, from conventional petrols and diesels, to the hot GTI and R versions, and on to the all-electric eGolf (now of considerable interest to business buyers thanks to its 0 per cent BIK rating). Quality levels remain high, and if the cabin is starting to look a little dowdy (especially on lower-spec models) then at least it remains spacious and practical. We mourn the loss of the practical, sensible Golf Estate from Irish price lists (a much better family car than any SUV) but the mighty GTI remains the king of the hot hatchback, even this close to retirement.

In two words: Above par.

Kia’s standard Ceed hatchback (the awkward punctuation of the old model has thankfully been excised) is a very impressive car all by itself. Handsome, well-made, and not bad to drive, it’s a high-value, high-quality thing, if not perhaps the most exciting. The Proceed, though, is better again. While it’s not as pretty as the concept version that preceded, the Proceed takes all that’s good about the Ceed, adds a modicum of additional sportiness, and most of all makes it look good. Half way between a hatch and estate, if you take a saunter around to the rear three-quarters, you’ll find an affordable Korean family car that does a half-convincing visual impression of a Porsche Panamera. Best of all, it’s no less practical than a common-or-garden Ceed, so there’s no sacrifice beyond the mildly inflated price tag.