Global demand will dictate supply for now, but what’s our top three - and wild card - in motoring with a plug 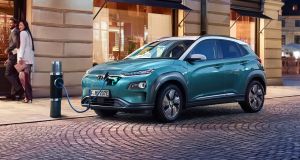 We’ve lumped these two cars together into one rating because, to all intents and purposes, they’re the same. The same chassis, the same electric motor and the same 64kWh battery stack. That’s enough to give you as much as 450km of one-charge driving range, which is genuinely exceptional, and not likely to be much-outstripped in this class for quite some time. It’s a reliable figure too, as in mixed driving you’ll not see the range-to-empty display suddenly plummet, as you would have with first-generation electric cars.

Only lengthy motorway journeys are still an issue, but at least they’re slightly less of an issue than was once the case. Performance is brisk too, with 204hp from their single electric motor, so you’ll be GTI-rapid away from the traffic lights. Both cars are well made, too and come with excellent warranties. Shortcomings? Well, only one really, which is the price tag - €38,000 or thereabouts is a lot of cash to hand over for relatively compact Korean cars, and the interior quality of both is not good enough at this kind of price level. Neither is exactly what you’d call a drivers’ car, either, with so-so handling and mute steering.

The styling is arguably the most divisive of all BMWs and it’s arguably not pretty, but there’s a charming, almost 1950s experimental car vibe about it. Well, at least it looks better in real life than it does in the pictures, at any rate. Inside, it’s even better with exposed carbon-fibre (virtually the whole chassis is made of the stuff), natural-grain wood trim, and neat digital displays.

It’s not spectacularly practical (there are only four seats and the boot is pretty small) but you’d get away with it for everyday use. Best of all, not only is it genuinely fun to drive (if ultimately limited by the narrow-gauge of its aero-friendly tyres) the new 120-amp battery gives it a genuinely useable one-charge range of more than 300km. Not cheap, but then it is a carbon-chassis’d BMW…

Nissan’s second-generation Leaf is fast-becoming the normalised face of electric motoring. While its styling is a little more involved than that of a ‘normal’ Nissan, it’s these days a relatively quietly-styled car, far removed from the amphibian-on-the-loose look of the original Leaf.

It seems to be working - the Leaf has found 602 homes in Ireland so far this year, out-selling such ‘normcore’ cars as the Kia Ceed, Audi A3, and Ford Mondeo. Imagine that - an all-electric Nissan outselling the once-mighty Mondeo.

As a car, it’s fine - the handling’s pretty dull and the interior isn’t much more exciting than that. As an electric car, though, it’s really good. It pioneered the one-pedal driving setup, where the drag of recharging the battery does most, if not quite all, of your braking, and the one-charge range is… well, it’s a little mixed actually. Nissan claims 275km for the most affordable 40kWh battery version, but we found that it would struggle to do more than 190km. Hopefully the incoming new 60kWh version will fix that issue, as well as giving the Leaf decent motorway range.

The only reason that the I-Pace gets wild card status is its price, which is seriously expensive. In fact with a base-model retail price of €81,585, and a realistic options-in of considerably more than that, it’s properly, loftily expensive.

Then again, it might just be worth it… Not only is it based on a currently-unique chassis and platform (so there’s no potential for Jaguar saving money on shared components) it’s also the best-to-drive electric car we’ve yet driven. It’s about to have some pretty serious competition in that regard from the likes of the Audi e-Tron quattro (only just arriving on the market now) and the Mercedes EQC (still a few months away) but they’ll have to do well to keep up with the Jag’s sharp steering and its seriously addictive 400hp electric acceleration.

Two motors means four-wheel drive, so it’s good for the winter months, while the styling looks good all year round. The cabin is lovely too, although perhaps a touch small in the back. Our only gripe is that the claimed 470km one-charge range realistically works out at something closer to 390km, but that’s rather sadly par for the electric car course at the moment.