There’s also a Korean, French and surprise Italian option on our list 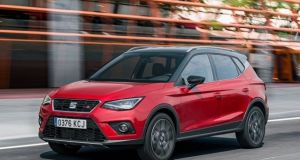 Let’s get something straight. These are basically the same, engineering-wise, as a small hatchback, but come with the price tag of a family hatchback. If you’re looking for something practical, get a small estate instead. But if you must, then the Seat Arona is the best of the bunch (although it’s about to have some very sharp in-house competition from Skoda and VW with the Kamiq and T-Cross). Smart in its style, and very roomy indeed on the inside (far more so than is usually the case for cars such as this) the Arona also benefits from using the same MQB-A0 chassis as the Ibiza, which means you get reasonable dynamics, and access to the excellent 1.0-litre TSI turbo petrol engine. Sporty-looking FR models look great, and the boot is large enough for family duties (again, not a given in this class).

This is effectively the replacement for the old C3 Picasso MPV, but because no-one buys MPVs anymore, it’s been re-packaged as a small crossover. In that sense, the disguise is really only skin-deep, as inside the cabin is clearly an evolution of both what the C3 Picasso used to do, mixed and matched with bits from the C4 Cactus. On the whole, it’s a success - overall quality feels good, there’s decent space, hugely comfortable seats, and the same choice of excellent 1.2-litre ‘PureTech’ engines as you’ll find in the C3 small hatch. Handling is… well, it’s very soft. That’s good, in one sense, as it means that the C3 is very comfy on poor roads, but equally it wallows and squeals if you try to push it any way hard. Not a bad effort, though, and a reasonable family car. Comes with a five-year warranty now, too.

Hyundai’s small crossover actually seems to lift a couple of styling cues from Citroen - look at those double-decker headlight units and tell me they’re not inspired by the C3 and C4 Cactus - and while it’s a bit over-styled in some ways, for the most part it’s a handsome little thing. Be careful how you spec it, though. For a start, it really and truly works best in bright, strong colours, but there are more significant issues in mechanical spec. Don’t go for the range-topping 1.6 turbo petrol four-wheel drive model - it’s pricey and ultimately unsatisfying. Hyundai’s excellent 1.0-litre turbo three-cylinder is a much better choice. The Kona’s not bad to drive, either, but does rather fall into the (sadly typical for this class) category of they-haven’t-tried-becasue-they-know-you-don’t-care. Cabin quality is also lacking, as some of the surfaces feel very cheap indeed. That’s more of a problem if you upgrade to the all-electric Kona EV, which starts at a lofty €38,130. Then again, it does have a nigh-on 450km driving range, which not many other EVs can match right now.

Fiat is still suffering under a cloud of a bad rep in Ireland, and its sales are frankly dismal right now (aside from the small 500, which seems immune to such things). The 500X, frankly, deserves a little better as it’s a genuinely decent small crossover. Its 500-inflated-with-a-bike-pump styling may not do it too many favours, but at least it’s a little more distinctive than most. Inside, cabin quality is decent, although the boot is rather on the small side if you’re trying to haul around a growing family in one. The new ‘Firefly’ 1.0-litre turbo engine revs freely and sweetly, and it’s not too shabby to drive. So why does no-one seem to buy one? Hard for a dog to shake off a bad name, I guess…