Top cars for 2020: We love the styling and we’re won over by the price 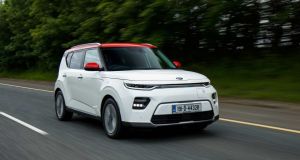 We have long had a bit of a soft spot for Kia’s quirky Soul crossover, and that’s a soft spot that’s fast expanded now that it’s gone all-electric.

First off, you have to buy it in white because then it looks like a Star Wars Imperial stormtrooper’s helmet on wheels, and who wouldn’t want that? Second, it has seriously impressive one-charge range.

Kia claims you’ll get 450km out of a full battery, and in our experience you’ll pretty easily get a reliable 420km, even with motorway miles mixed in.

That’s thanks to a big 62kWh battery that, unfortunately, does make the eSoul rather expensive - like €35,995 expensive, which is a lot for a Korean crossover with a small-ish boot.

On the upside, that’s slightly cheaper than what Hyundai asks for the mechanically-identical Kona Electric, and a little cheaper than Kia’s own eNiro with the same battery. Performance, thanks to a 204hp electric motor, is really very good, but it’s rather blunt to drive, the chassis being hampered by the sheer weight of the batteries.