Top cars for 2020: A top-class Corolla is the icing on the cake for a bumper year at Toyota 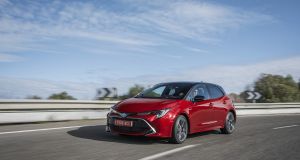 It has been something of a bumper year for Toyota. Not only has it renewed or replaced three of its most important models (Corolla, Camry, RAV4)it has also introduced a fast and fun sports car (Supra)and taken top spot in the Irish sales charts. It’s the new Corolla that’s taken that number one position, and for the first time in generations, it’s richly deserved.

Where previous Corollas (and the old Auris) were worthy-but-dull, the new one delights the senses as much as it rewards the sensible. Sharp-suited (more so as a hatch or an estate than the slightly dowdier saloon)and shortly available only as a hybrid, it’s economical in day-to-day driving, but also engaging and enjoyable enough to drive to make a long journey a choice, not a chore. A tour de force comeback for the world’s best-ever best-seller.

Sum up: Meet the new boss, better than the old boss.