Top cars for 2020: Plug-in 330e is the epitome of what’s great about this German 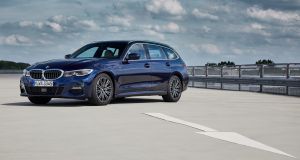 For BMW, 3 really is the magic number. This time last year the latest 3 Series was barely off the boat and we had still to taste it in most of its flavours. Still, it made the number 3 slot in our top 10 list back then. With more time to drive the new 3 Series, test the various engine choices, and reflect on its ability, it has earned its crown.

From the mid-1970s through to today, it has been the pinnacle of premium saloon motoring. The E30 version that dominated the 1980s and early 1990s is still the epitome of what BMW is about, or at least aspires to be about. These days the E30’s DNA is most closely cloned in the wonderful 2 Series coupé, but in this latest version of the 3 Series there’s definite strains of the E30 genes in the mix.

The 3 Series has had a few wobbles along the way, getting a little fat and frumpy in its fifth generation. But it has found its form again with this latest edition. That said, it has not been without its controversies. Mostly, they’re to do with the styling - and our ongoing gripes with the infotainment controls. But forget about silly options like gesture control and you have a top-end interior in a car that’s engaging to drive.

The Touring estate, as ever, looks smarter and is by far the best model of 3 to buy. But we know you’ll opt for the saloon. Let’s just agree to differ on this front.

As for the engine? Well, one reason we’ve given top spot to the Beemer is that there is a wealth of engine choice on offer to suit all needs and bank accounts, and there’s not really a dud in the lot.

Once again the ubiquitous 320d diesel is overshadowed somewhat by the excellent 330e plugin, which actually works out cheaper to buy, would be cheaper to run if you make maximum use of its electric driving abilities, and is faster in a straight line. Win, win, win.

There’s yet more winning in the steering, which has the sort of enthusiastic feel and feedback that cars aren’t supposed to have anymore. In a world of boring and bouncy crossovers and SUVs, the 3 Series is a reminder of why it’s still incredible fun to get behind the wheel of a car and drive.

Sum up: Reminding us why driving is fun.