Priced out of Dún Laoghaire? Head to Bray

With its picturesque promenade and period homes, the town is a draw for Dubliners 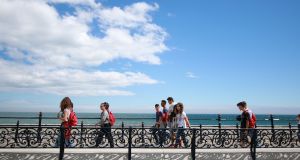 Bray seafront which is often filled with locals and visitors on sunny days. Photograph: Nick Bradshaw

Perched just across the border line of Dublin into Wicklow, about 12 miles south of Dublin city centre, Bray – Ireland’s fourth-largest town, has one of the most picturesque coastline settings along Ireland’s east coast, and also offers a hugely diverse range of housing to suit most buyers on the spectrum.

Strongbow granted the lands on behalf of the crown to Sir Walter de Riddlesford circa 1171. It was from that period that the first origins of the town developed around De Riddlesford’s manor, with further expansion around Kilruddery by the Brabazon family.

However, modern Bray came into existence due to the arrival of the railway from Dublin, built by rail entrepreneur William Dargan in 1854, which turned the Wicklow town into what was at the time regarded as the Brighton of Ireland: a seaside retreat for citizens from the capital with the grand Victorian terraces, and pretty Edwardian semis to prove it. That seaside-resort appeal continued right through until the 1970s, when air travel challenged the town’s position as a destination for domestic holidaymakers. In more recent years, however, Bray has re-established itself as a destination for Irish daytrippers and also non-Irish tourists looking for a getaway within striking distance of Dublin.

The town is also famous as the location of Ardmore Film Factory – to the south-west of the town – where productions such as The Spy Who Came In From The Cold, Braveheart, My Left Foot and Veronica Guerin were filmed. As a result Bray became a temporary playground for film stars when they rented homes in the town, with Robert Mitchum, for example, a regular at the old Sunnybank Inn, where he supped on Ballantine’s Scotch, while in town to film A Terrible Beauty.

In the property market, “Bray is attracting those that find south Dublin prices prohibitive, such as those in Dún Laoghaire, Dalkey, Killiney, and south county Dublin in general”, says Garrett O’Bric, director of HJ Byrne.

The town’s large stock of period homes is a real draw for house hunters looking for plenty of living space space and original features, at relatively reasonable prices. From the grand seafront terraces, to the secondary roads and avenues that lead off it, there’s good variety as well as value. The more desirable property in Bray is at the southern end of the town, with King Edward Road regarded as the one of the best addresses.

Throughout the rest of the town, most notably at the northern end, house prices vary across the price range.The entry point to the market at present is €170k, which starts bidding for a one-bed apartment in The Headlands – a tasteful development in the south-east of the town. At €200k, one can buy a one-bed at the south-western side of town at 77 Riversdale. From €210k-€250k there is another selection of apartment properties across the town.

Large two-bed apartments, and a terraced house at for example 9 The Green, Woodbrook Glen (€285k), range in the late €200k price bracket. At €329k, one can buy a three-bed, semi-detached at 1 Glenthorne Close. That housing option caters for the largest segment of the market and runs up in price as high as circa €395k. From €400k upwards, larger, better maintained, semi-detached and also detached homes can be purchased, such as 21 The Lawn, Woodbrook Glen (€399k), or 2 Brickfield Cottages (€420k).

These type of properties, albeit larger, continue up into the €500k range, such as Leacaban on the Putland Road, for €550k.

Large detached homes form the next sub-section, ranging widely from €650k at Laburnum on Newcourt Avenue to Killarney Glen House on the Herbert Road, for €975k. At the top end of the market one can buy a home on the King Edward Road for €1m-plus.

Any new developments coming on stream?

“Compared to nearby areas in Wicklow [such as Greystones, Ashford, Kilcoole and Newtownmountkennedy] there are fewer new developments in Bray,” says O’Bric. “But Durkan are building a new development of homes on the Church Road [which is being sold by Dillon Marshall].” Full details are yet to be announced on this development, known as The Friary, with more news to be announced at the end of the summer. REA Forkin are selling Waterside Mews, a development of six, semi-detached, four-beds on the Dargle Road.

What Bray does have a lot of; however, is development land. At the north-western end, around Rehills, there is large tract of land along the route of the River Dargle, while further west and on raised high ground overlooking the town is another “large segment of land at Old Fassaroe owned by Cosgraves. The developers were denied planning by An Bord Pleanála at the end of 2017”, says Edmond Place, associate director of DNG Bray. A judicial review in the High Court could yet see the 700-plus homes development go ahead. What held back the initial application was a perceived lack of adequate road infrastructure to serve the parcel of land, as well as a potentially negative effect on the currently established retail trade in the town.

Similarly in the south-western part of town there is further development land running along the Bray Commons – also with a riverside setting.

Bray has two arteries: the Dart runs a regular service from Dublin into the station in the heart of the town, which is the main transport method tourists use to make their way to the seaside location. Further back from the seafront, the Dublin Road runs into Main Street, and is connected to the N11 running further south into Wicklow and back into Dublin, and also connecting to the M50 ring road. And it’s here that one of Bray’s problems lies: at peak hours this thoroughfare is clogged and greatly delays travel both in and out of the town.

On a sunny day, the seafront promenade is rammed with people, who also continue the trek up Bray Head to the Cross, or, on to Greystones and the Happy Pear via the Bray to Greystones cliff walk.

Away from the coast and mountains, Bray is known as a soccer town through Premier Division Club Bray Wanderers – twice winners of the FAI Cup. The GAA is also strong via Bray Emmets – twice Wicklow football champions.

Two new schools are also being built at present at the northern end of the town on the Dargle View Golf Club grounds: Coláiste Ráithín and St Philomena’s Primary School.

As a town to hang out in, Bray is quality. The Main Street is the commercial centre in the day in terms of shops, and also has a number of decent places for food and coffee, notably The Wild Goose Grill and Noah’s Ark Restaurant. But there are still a number of empty lots on the Main Street that offer huge potential.

There are also plans for a new commercial development on Main Street, the Florentine Centre, to be developed by Oakmount, which will house 12 or 13 shops, and is scheduled to open in December 2019.

But the real vibrancy, especially in the evenings, is along the seafront, with The Harbour Bar as well as the Martello and The Porterhouse all public houses that attract crowds from nearby and from south Dublin.

For food, the Box Burger, Platform Pizza and Cowfish complex is the on-trend spot. Right beside the harbour, Dockyard No 8, run by Alex O’Sullivan, also gets this column’s nod. Set beside yachts and Bray Boxing Club – the stable of world champion Katie Taylor, the food here is superb, and the frontage has a very clever awning for use during the summer months.

That section down by the harbour is another area of Bray that could be further developed, with a large segment of land currently occupied by storage containers and wasteland. A new development of commercial and residential, linking up to the area surrounding Dockyard No 8, and the Dublin Road, via a road under the Dart line – which is currently blocked off to public access – would create a third commercial centre for Bray, alleviate some of the traffic problems on Main Street, and also provide much needed new-build housing.