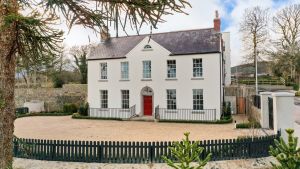 Originally surrounded by green fields, the landmark Georgian farmhouse Rockville House once had a substantial dairy herd that supplied many of the capital’s hospitals with milk.

Built in 1757 the five-bay property was bought by Frederick Jackson in the 1960s, and in the 1970s and 1980s included a successful racing yard that produced winners such as New Road, ridden by the maverick horse woman Louise Cooper, and Morning Day, ridden by then relative rookie jockey Willie Mullins, now a top-flight trainer. It also supplied the horses used in the 1992 Irish film Into the West.

The stately farmhouse is at the heart of Rockville, a housing scheme, on Glenamuck Road in Carrickmines, Dublin 18, masterplanned by Frederick’s son and chartered engineer Brendan Jackson through his company Goodrock Project Management. He approached Maplewood Residential to build the first phase of the scheme, having previously worked with Maplewood on Knockrabo in Goatstown and Dodderbrook in Ballycullen.

Set high above the city limits on the far side of the M50 motorway, the last of the homes within the development are now being brought to market. These are housed within the two-storey over-basement original farmhouse, which originally extended to well over 4,000sq ft. Considered to be too big for most buyers’ living requirements, it has been cleverly subdivided into a pair of unique semi-detached residences.

Instead of the more traditional side-by-side set-up, these are set back to back. The new configuration offers an affordable entry point for lovers of period proportions without the headache of draughty hallways and creaky floorboards as these homes have been future-proofed, insulated and fully renovated.

Phase one of Rockville, which comprised 37 new houses, 12 apartments and a gate lodge which sold in 2019 for €635,000, is now sold save for the two semis launching now.

The larger of the two – number 1 – is a two en suite bedroom plus two attic room property of 268sq m/2 ,884sq ft taking in the five bays to the front of the house, the original hall and the reception room’s soaring ceiling heights.

It has underfloor heating at basement level, where there are two rooms, set out as a cinema and gym, and from its first-floor accommodation there are spectacular city views across the bay to Howth. Seeking €795,000 through selling agent DNG, it includes some period features such as timber floors and dado rails at first-floor level.

Conservation architect Rob Goodbody worked with Alan Cloake of Duignan Dooley Associates (DDA) to ensure that any remaining features were retained, including the original sash windows which have been restored and repaired.

The entrance to number 2, a smaller two-bed plus study home of 135sq m/ 1,453sq ft is to the rear of the house, through a new zinc-clad, double-height atrium where the stairs are located. It is seeking €595,000.

The homes include kitchen units by Dalkey-based Kelly Kitchens and an appliance package that includes a very smart double oven Leisure range by Cuisinemaster that comes with an induction hob and slim-fit seven-bottle wine fridge.

Both properties have south-facing gardens, one screened from the other by a well-positioned and lushly planted hedge.

While earlier launches in the scheme were staged for sale, these two properties have been digitally staged with virtual furnishing. Prospective buyers should note that the properties will be empty when viewing after lockdown restrictions lift.

Phase two of the scheme, Rockville Avenue, will comprise just five new A-rated four-beds, and will be completed by Goodrock Project Management, Jackson’s first foray into the development market.

Also designed by DDA and set over 2½ storeys, the properties are being sold off plans with completion expected by August or September, according to selling agent DNG’s director of new homes, Gina Kennedy. Lockdown restrictions mean building works are on hold.

Planning permission has now been granted for phase three of Rockville and this will comprise 56 apartments.

The original property’s granite walled garden, designed by Dermot Foley Landscape Architects, is an additional asset for all Rockville residents to enjoy. Its ancient magnolia tree, one of several mature trees retained by the homebuilders, is now surrounded by box planting, fruit trees and herbs for residents’ use – the idea being that you could nip down to the garden for a sprig of rosemary for the Sunday roast or a clump of mint to add to cocktails on a Saturday night.

Picnic tables also form part of the picture and offer a welcome change of scene for lockdown residents working from home.