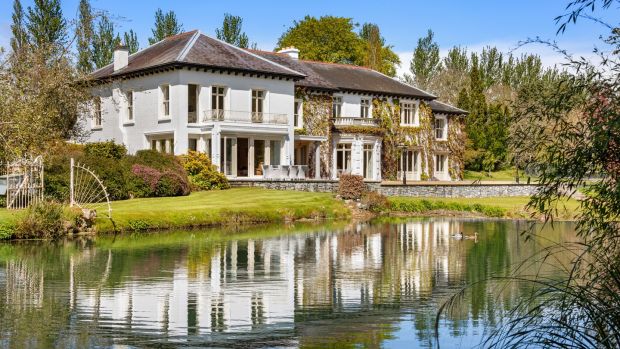 “We wanted a country house, but we didn’t want to live in the country,” says Gerry Byrne, explaining the appeal for the family of Kilcreene Lodge in Kilkenny, which is set on 10 secluded acres with mature gardens, woodland and a lake, but with the city and its amenities at the end of the lime-tree-lined driveway.

He and his wife, Christine, bought the property in 1999 from the Smithwicks, the famous brewing family who had been in situ for centuries. “We didn’t care what condition it was in,” says Gerry, who fell in love with Kilcreene and its bucolic grounds on “on the spot”.

“It wasn’t for the faint-hearted, but it is what we do, and we did it in stages; we paced it out in terms of time and financially,” he says.

They were moving from Killiney in south Dublin with their three young children at the time, as they were developing a former bank building in Kilkenny city into the Hibernian Hotel. The couple kept that for 15 years while also opening the Left Bank gastro pub and more recently the Blue Bar, both of which they still run.

Of the many challenges facing them in the renovation was improving the flow of the rooms.

“There really wasn’t a functional front door,” says Gerry of the layout, the result possibly of the house being built in stages over time, so improving the interior circulation was priority. Originally a linen miller’s house built in 1690, it became home to generations of Smithwicks when John William Smithwick bought it in the 1880s. He quadrupled its size, employing fashionable architect Charles Geoghegan to create what is described on a database of important buildings, the National Inventory of Architectural Heritage, as “a pleasant Victorian merchant’s villa”.

A key element for the Byrnes in the renovation was creating a new lake-facing entrance door and hall. Derry-based O’Neill Bros Master Joiners was commissioned to make the new staircase, as well as work on the windows and doors.

“There’s a fine line between being over-ostentatious and giving the house the prestige it deserves,” says Gerry of the entrance hall with its sweeping staircase, gallery landing and encaustic tiles. Other curiosities that needed sorting were the three interconnecting bedrooms accessed by a single door; now the house has eight bedrooms, all ensuite.

The Byrnes extended by adding a triple-aspect lake room and extending the main bedroom above it to make a suite with bathroom and dressing area. There are five reception rooms, all grand with beautiful features such as stained glass windows, an elaborate timber ceiling in the diningroom and ornate plasterwork in the drawing rooms. As for the kitchen, says Gerry, “it would have been tempting to go for a zingy kitchen,” but they wanted to keep the original ceramic brick wall – a beautiful feature “downstairs” in many grand period houses – and so, in a relatively small space, they installed a country-style kitchen with Aga and Victorian floor tiles sourced, as were as many elements as possible in the renovation, through architectural salvage. Other rooms include an office, music room, boot room, sun room and several utility and service rooms.

Now spread over 1,149sq m (12,386 sq ft), Kilcreene Lodge is not a small house, although for the Byrnes and their three girls growing up it was a simply a family house; it never felt too big, says Gerry.

The couple are now downsizing – the house, he says, is too much for two – and semi-retiring, but staying in Kilkenny where the Left Bank, with its 90 employees, has been gearing up for the relaxing of Covid-19 restrictions.

He says they are looking for a smaller property – although, as Kilcreene’s stables are not included in the sale, and would appear ripe for conversion subject to planning permission, that may be part of the plan. He’s not saying. In the recent past the couple hived off a section of the land out of sight of the main house – there were originally 22 acres when they bought – and got planning permission for nine houses, each on a half-acre plot. The couple don’t intend developing the houses themselves.

Grand country houses with period charm and secluded lands tend to be remote. The accessibility of Kilcreene Lodge to Kilkenny city, which itself has good connectivity to the capital – will likely prove a strong selling point, just as it did for these buyers in 1999. Now, though, there’ll be no need to start renovating in one room and work outwards, as the Byrnes did, because it’s all done.