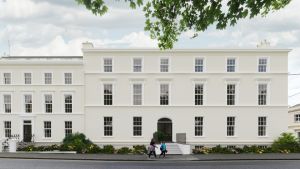 Anglesea is a boutique development housed within the former Anglesea Arms Hotel on Crofton Road on Dún Laoghaire’s sea front.

Situated just minutes from the Dart and bus stops, Anglesea is a small but perfectly formed set of apartments, duplexes and a penthouse set within the fine rooms of the former hotel by Ballina-based Bourke Builders.

The second-generation house builder, established by Patrick Bourke in 1960 is now run by his children; Brian, Emer and Joseph. It has several strings to its bow, from residential to retail, education, civic and health buildings. In London its high-end fit-outs include footwear king Giuseppe Zanotti’s Knightsbridge stores and fashion label Hugo Boss shops, as well as the conversion of office buildings to high-end apartments at Brixton Hill and nearby Coldharbour Lane. Its conservation work includes McKee Barracks and the lower house in DIT’s Grangegorman in Dublin.

Much of the restoration work at Anglesea was completed in its Ballina workshop, where the sash windows, shutters and floorboards were restored. Custom-designed panelling was also carried out for each of the 13 units – a mix of one-, two- and three-bed apartments, two- and three-bed duplexes and a penthouse on the top floor.

There are period features aplenty, from original coving and ceiling roses – restored by the Old Mould Company, to original fireplaces whose tiled inserts, for the most part, are also original. This, coupled with the fine period ceiling heights combine to create open spaces that can, bar the units already fitted-out, be customised to include your own style of kitchen, bathroom and sanitary ware as well as bedroom fit-outs and flooring.

The firm’s joiners also built the custom kitchens in the show units. The Schooner, a two-bedroom show unit with 120sq m (1,292sq ft), features marine blue units and polished copper counter tops and an island set on wheels that can be locked into position or moved back and forth as required. Seeking €1.175million through selling agent SherryFitzGerald, this is one of three units already sold.

Emer Bourke is responsible for the interior finishes. Having run her own interiors business in Ballina, Esoteric, she travelled to the UK and France to source antiques and furnishings specifically for Anglesea. Several pieces were also sourced in the west from Yeats Country Antiques and Connaught Antiques.

Insulation and acoustic board between floors minimises noise transfer. In The Clipper, a two-bed unit of 82sq m (883sq ft), oak parquet has been laid and graphic wallpapers frame each room. Acrylic dining chairs are set around a pedestal dining table while antiqued glass is used as a splashback in the kitchen. It’s a confident blend of old and new styles. This unit is priced at €750,000.

Some of the properties offer a second living room – a library with a south-facing balcony to the rear of the property – which means they can be configured as three- or four-bedr residences. Prices for these units, which measure from 222sq m ( 2,390sq ft), are from €1.795 million.

At the top of the house, on a newly added level, is a two-to-three bed penthouse with floor-to-ceiling panoramic views of the harbour and Dublin Bay’s shipping channels beyond. This property is asking €1.795million.