Boutique owner’s Crosthwaite Park home, improved and extended over 20 years to a comfortable five-bed on a fine garden site 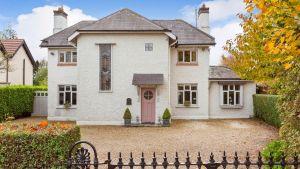 It’s a safe bet that the home of someone involved in fashion – or indeed any aspect of design – has a definite style about it, a nod to what’s current in interiors and a sense that the owner carefully chooses every detail. And this is the case with Margaret O’Callaghan’s Dún Laoghaire home.

Years ago she became an accidental retailer when, unable to find the kind of stylish fashionable shoes she liked, the then stay-at-home mother with five small children established Soul, an upmarket shoe boutique (later expanded and renamed Soul Woman to include clothes) in Glasthule, a village close to her home at Shandon, Crosthwaite Park South.

The family moved into the detached pebbled-dash house about 20 years ago, trading up from a smaller property nearby. It wasn’t the house that first attracted her she says, it was the garden – Shandon stands on a third of an acre set back from the quiet road, with a mature south-facing rear garden that’s 32m long, enclosed and not overlooked. The surrounding area is mostly lined with grand two-storey-over-basement period properties but Shandon is one of three 1930s houses which probably all started out looking similar but have had significant makeovers.

Shandon needed modernisation when the family first bought it but the work subsequently carried out went far beyond that, and included extending to the rear and on both sides – bringing the overall size to a substantial 235sq m/2,530sq ft. Also part of the first wave of renovations was the construction in the garden of a small pitched roof building divided into two, to give O’Callaghan a home office and the family a large laundry room.

The builders were in three times as the family grew and the house was improved each time – the last major development was 10 years ago, with all works at every stage overseen by local architect Joe Kennedy of Smith and Kennedy who transformed it in the most sympathetic way possible.

He didn’t just retain the house’s pre-war charm – he enhanced it. The entrance door was originally to the side but he moved it to the front adding an arts and crafts-style canopy over it; commissioned a long, thin, stained-glass window that’s so perfectly in keeping it looks original, and added other exterior touches such as the glass block window in the front which belongs to one of the upstairs bathrooms.

All the windows front and back were replaced with double-glazed units, designed with panels handmade from beaten glass with lead detailing, and there are arts and crafts-style details in the custom-designed interior doors and staircase.

The kitchen, directly off the hall, which O’Callaghan describes as the heart of the home, was updated most recently. Realising that installing a walnut kitchen with its dark wood was probably not the best choice for a north-facing room, even one that already had a cream stone floor, she commissioned a brighter look - a bespoke cream-painted timber kitchen from McCauley’s with Corian worktops and a large central island unit. The cream Aga was supplemented with a more practical double oven which the teenagers found easier and quicker to use and, as O’Callaghan is a keen baker, she commissioned a fitted-out walk-in pantry for extra storage.

To the side off this is the first of the five double bedrooms, looking out to the front – its vaulted ceiling finished with tongue-and-groove panelling and a new panelled door matching the 1930s doors elsewhere in the house. Adjacent to this is a shower room.

The kitchen area flows into the extended rear area off the house which made space for a bright living room and dining room each with doors opening out to the garden. There is a further living room to the front – the house’s original reception room – a cosy space now floored with oak herringbone parquet and with timber-panelled walls and an inset fire.

Upstairs there are four bedrooms – three doubles and a large single. The latter was originally bigger but O’Callaghan realising that the hot press which was also used as an airing cupboard was too small for a family of seven, and had it enlarged by taking some space from that bedroom.

The grandest bedroom was built 10 years ago when the house was extended on the other side and incorporates a dressing area, en suite and features a Juliet balcony overlooking the back garden and bi-fold glazed doors. The architect chose a different exterior finish for this new extended part – timber cladding that mirrors the 50sq m/538 sq ft garden room built across the rear of the garden. It has been used as a hangout space for the children but as it has a bathroom and kitchen (those walnut units recycled) it could easily be repurposed by new buyers as a living space for an au pair or relative.

Now that their children are young adults and are starting to go their own way, O’Callaghan and her husband are downsizing to a newer house with a smaller garden nearer her shop in Glasthule. With a Ber of C3, Shandon is for sale through Sherry FitzGerald seeking €1.925 million.