Join the Dalkey set in turnkey Tudor for €1.925m 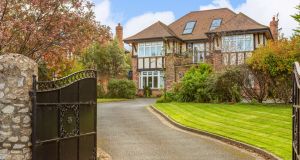 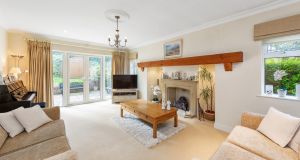 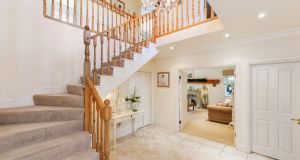 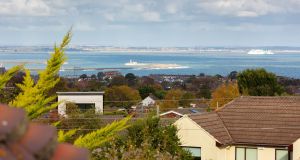 This large five-bedroom house near Killiney Hill in Dalkey, Co Dublin is in meticulous condition nearly 20 years after it was built. Everything in the house – carpets, tiles, paintwork, fittings – are shades of cream and white. It looks freshly painted but not so, says the owner, who is clearly houseproud. It’s all the more remarkable given that it’s a family home, where the owners have three Maltese terriers. But now that their three daughters are grown, the family is downsizing.

Woodbine, a detached 260sq m (2,800sq ft) five-bed (with an extra 40sqm/ 430sq ft attic room), is for sale through Sherry FitzGerald for €1.925 million. It is one of three houses built in mock Tudor style on the site of one large period home around 2002. Woodbine has good views of Dublin Bay from Velux windows in an attic room – and glimpses of the sea from bedrooms and a balcony at the front of the house.

Woodbine’s front door opens into a small entrance hall from where double doors open into a double-height front hall where stairs curve up to a wide top landing. There’s a small downstairs toilet in the hall.

On the right, interconnecting reception rooms run from the front to the back of the house. The room at the front has a box bay window and fitted bookcases; double doors open into the slightly larger drawingroom, which has a coal-effect gas fire in a sandstone fireplace with a long timber mantel and French doors opening into the back garden. A cosy family room at the opposite side of the front hall also has a box bay window.

The good-sized kitchen/breakfastroom is at the back of the house, with French doors opening from the breakfastroom side into the back garden. Floored with cream tiles, the smart kitchen, designed by Danish Design, has a striking colourful mosaic splashback behind a Britannia range. An island unit is topped with black polished granite, with a circular butcher block-topped unit at its end. A good-sized utility room with a Belfast sink has a door into a side passage.

Upstairs, the main bedroom overlooking the back garden has a fully-tiled en suite with bath and shower, fitted wardrobes and a small understairs walk-in wardrobe. There’s a single bedroom adjacent  (currently set out as a study) which agent Rosie Mulvany believes could be converted into a large walk-in dressingroom. Three of the five bedrooms are en suite. French doors on the landing open onto a terracotta-floored balcony which has distant views of Dun Laoghaire pier.

Steep carpeted stairs lead up to the converted attic room used as a bedroom; it has an en suite bathroom, good under eaves storage and very good sea views.

Woodbine stands on a 0.2 acre garden: steps from a wide sandstone patio in the back garden lead up to a semi-circular lawn. It’s private, with hedges and at the back a high stone wall. At the front, there are lawns on either side of the front driveway, and room to park several cars.

Woodbine is near the Killiney Hill end of Saval Park Road and a fairly short walk to Dalkey village.