Belcamp, a four-bedroom Georgian house in excellent condition, is full of theatrical flair 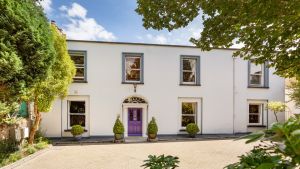 The house that the late Betty Ann Norton lived in in Dún Laoghaire for 50 years until her death in June will be part of her legacy: it has been left in trust to the theatre school that she founded and directed for more than 60 years.

“She was a good actress but teaching was her vocation,” says her brother, the actor Jim Norton, of his sister. Pupils who are now teachers will continue to run the Betty Ann Norton Theatre School, now located at the St Louis convent in Rathmines, he says.

The Georgian house that she and her late husband, Michael Cunneen, lived in has plenty of theatrical flair and has been kept in excellent condition. Rooms are richly decorated, with gold patterned wallpaper in the drawingroom, for example, and a diningroom wallpapered in vivid green.

Perhaps most dramatic of all is the lush back garden, where a 105ft-long lawn winds past a sandstone patio with a water feature and mature trees that include Scots pine, cherry and tulip trees to a gazebo and two timber sheds at the bottom of the garden – one labelled Clonbrock House, the name of the building on Harcourt Street where her theatre school was once located. Gardener Paul Maxwell has tended the garden for the past 40 years, says Jim.

New owners may want to reconfigure parts of the house at the back and modernise the decor, but it feels like a warm, comfortable home as well as having a touch of grandeur. It was a home away from home for her brother Jim, the place he’d always stay on visits home.

Jim, a stage, film and television actor who mostly lives between the UK and the US, and Betty Ann grew up on the South Circular Road and in Goatstown. He was a boy soprano but was sent to the Ena Mary Burke School of Drama and Elocution “because of my terrible Dublin accent”. There he joined his older sister Betty Ann, who went on to qualify at the Guildhall School of Music and Drama in London in 1957. She gave classes right up to the Covid-19 crisis, prepared Zoom classes for her tutors to give, then strictly cocooned, dying unexpectedly in June, a week before her 84th birthday.

Many well-known people were pupils in the school Betty Ann established, including Amy Huberman, Emma O’Donoghue, Jim Culleton and Áine Lawlor. Many who went weren’t pursuing a career in the arts: “Every second person I meet in Dublin tells me they went there,” says Jim.

The house needed a huge amount of work when Betty Ann and her husband bought it 50 years ago, says Jim. They added a kitchen and sunroom at the back, and about 15 years ago, a double-height side extension that accommodates a library-study with a two-storey wall of bookshelves: stairs lead up from the ground floor to a dressingroom-cum-study on the landing where Betty Ann’s desk overlooks the back garden.

The entrance hall has a pale marble-tiled floor, centre rose and ceiling coving. The drawingroom on the right is richly furnished, with gold wallpaper, marble fireplace and elegant period furniture. Running from the front to the back of the house, it is bright, with a tall sash window at the front and doors at the back opening into the sunroom, which opens into the garden and the library-study. The formal diningroom on the left of the front hall has a fireplace with a black marble mantelpiece.

There is a small family room off the hall behind the diningroom which opens into the long kitchen-breakfastroom extension at the back, with utility room off it. The kitchen is a bright space with a Corian-topped island unit, polished terrazzo-tiled floor, vaulted pine ceiling and pine units. One wall is glazed from floor to ceiling, with doors opening onto a sheltered flower-filled patio.

There are four large double bedrooms upstairs as well as a family shower room on the return. The main bedroom opens off the main landing and also into the study-dressingroom on the landing at the top of the stairs from the library-study. The bedroom has striking gold-starred blue wallpaper, mirrored wardrobes on the landing and an en suite with a rolltop clawfoot bath painted blue. Another bedroom is painted a soft mauve with a huge mirrored bedhead, and another contains more books; there are books everywhere in this house. Upstairs and down, artwork and photographs line the walls, a backdrop to Norton’s busy life.

There is plenty of room to park in the large cobblelocked front garden and gated side access to the back garden.

Enduring mystery of those missing magical cars continues to baffle
7