€2.5m refurbishment includes gallery, cafes and a jetty for swimmers 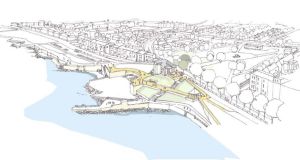 New plan for Dun Laoghaire: the historic baths have been idle for almost 20 years

The long-awaited redevelopment of Dún Laoghaire’s derelict Victorian baths got the green light on Monday after councillors voted for the go-ahead of the €2.5 million project, which was approved by the Department of the Environment in March.

The historic baths have been idle for almost 20 years since the closure of the Rainbow Rapids. Various redevelopment plans have been put forward since, from an ambitious €140 million plan in 2005 to a more modest €20 million restoration plan in 2010. The latest €2.5 million refurbishment now set to go ahead comes in a lot cheaper because it no longer includes plans for a public pool.

After a delay in securing a foreshore licence, this proposal has now been agreed upon with the former pool and main building to accommodate artists’ studios, a gallery and cafes.

The area will be landscaped to create a new park and a walkway to the East Pier and the People’s Park. At the bottom of the park, a jetty will be built to provide access to the sea for swimmers and a landing point for canoes and kayaks.

Construction is expected to start next year.