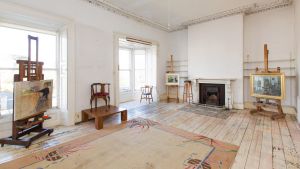 Originally, it was a drawingroom and in the future, it could be a very grand bedroom – but for artist John Coyle, the room on the first floor that stretched the width of his Clarinda Park house was his studio.

It’s a large, high-ceilinged, light-filled space with a deep bay window: one of Coyle’s paintings, standing on an easel by the bay, shows the studio as it looked when he worked there.

Coyle, who died aged 88 at the end of last year, was a well-known painter and member of the Royal Hibernian Academy, as well as being head of the art department of Blackrock College and its vice-principal.

He and his wife Sheila raised five children in their Dún Laoghaire home, one of them artist Gary Coyle.

It’s easy to see why he chose the bright, spacious first-floor drawingroom overlooking the road at the front of the house as his studio. It’s also easy to see how it could easily be turned back into a drawingroom as elegant as it must have been when the houses on Clarinda Park were built in the mid-19th century. As in the other rooms in the house, original features – elaborate ceiling cornicing, centre rose, a large marble fireplace – are intact.

Accommodation in the house includes five bedrooms, two of them in the unusually large returns at the back of the house. There are good views of the sea and of Dalkey and Killiney hills from these bedrooms.

The livingroom, diningroom and kitchen are at hall level, with steps down to the back garden from the kitchen.

There is also a large basement at garden level, with separate access to a self-contained two-bedroom flat. New owners could revamp this space as a large open-plan kitchen/livingroom, or redevelop it as a separate flat.

There is a small garden at the back of number 16, with a door on to busy Glenageary Road Lower, and residents’ permit parking on Clarinda Park East at the front.