Former boatbuilder’s property was bought in 2014 for €395,000 and fully renovated 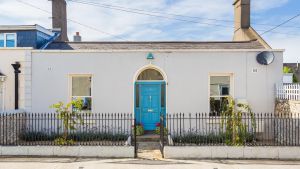 At the turn of the last century, sailing boats being wheeled down Patrick Street in Dún Laoghaire were a common sight. Boatbuilder Michael Mahoney lived at No 55, the gardens of which were his boatyard – now occupied by First Choice Autos.

A painting by Alexander Williams hangs in the Maritime Museum in Dún Laoghaire, of Eileen, a 17ft craft built by Mahoney– the oldest one-design keelboat racing class in the world. She was built in 1908 and still sails today, out of Howth.

An old telegram found in the property indicates that Mahoney’s business was thriving because he was considering buying a flying boat, but presumably did not, as the first recorded flying boat in Ireland wasn’t until 1935 in Foynes.

The brochure from that time shows a ramshackle house. “Everything was rotten, it had a “Do Not Enter” sign outside because it was so dangerous, and was home to pigeons,” says the owner, who is upsizing.

Essentially the property has been rebuilt. The 140sq m (1,507sq ft) house, dating from the 1860s, was redesigned by architect Robert Fowler and bears little resemblance to its former self. It has been transformed into a warm and inviting family home.

Fowler’s design opened two dark rooms up into one space that houses the living room and kitchen.

The oak kitchen, by Strawbridge in Mount Usher Gardens, is a far cry from the usual offering, and is deliberately unfitted, with free-standing units and no upper presses, allowing each unit to stand as a piece of furniture in its own right.

Opposite lies a formal drawing room, which looks out on to a cherry blossom in the front garden.

The house has three fine double bedrooms and the master is en-suite.

Apart from a few stains on the carpet in the drawing room, the property is in turnkey condition. What will appeal to buyers, in addition to the decor, is the sizeable rear garden, which has access to a lane. Parking is off-street to the front and also in the lane to the rear.