Thormanby Hill, by Cosgrave group, has spacious houses each landscaped for €40,000

Ten years after a 17-acre site close to Howth summit was purchased by Cosgraves for €17 million, the first houses in a scheme of 30 luxury homes off Thormanby Road have come on the market asking about €1.5 million apiece. Video: Daniel O'Connor 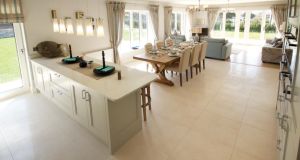 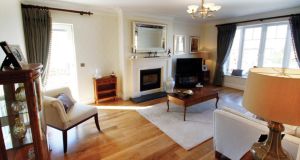 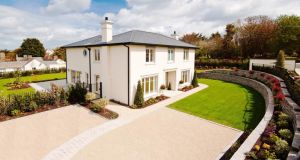 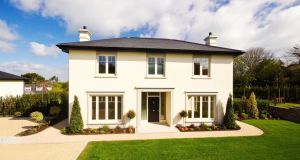 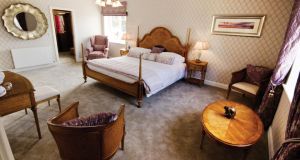 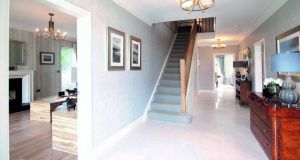 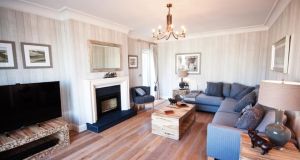 Ten years after a 17-acre site close to Howth summit was purchased by Cosgraves for €17 million, the first houses in a scheme of 30 luxury homes off Thormanby Road have come on the market asking about €1.5 million apiece.

The development of the low density Thormanby Hill has been closely watched by locals. For some, it’s an opportunity to buy into an area where planning permission is notoriously difficult to secure. For others, there’s a curiosity as to how the site turned out.

Originally zoned for just 20 houses, it was later rezoned to allow for 30 houses, amid some local opposition on the basis that many of the homes around the sloping site are mainly single storey developments.

Joe Cosgrave admits it was one of the most difficult builds they’ve been involved in (and they’ve been building houses since 1979), because the land had to be plateaued out for each site which stands on between 0.3 and 0.5 of an acre, all the while sweeping downwards in an arc towards a new 2.5-acre wooded parkland. A small playground has also been incorporated into the design. The staggered layout sets the houses apart, and the vista from the road once planting has matured will be primarily that of rooftops.

Each of the properties has been fully landscaped to the tune of €40,000 apiece, including gravelled drives and cobbled pathways. Despite the elevated site, sea views are not a selling point, though glimpses can be caught in the distance on upper levels. The location, however, is just a short freewheel down to the very picturesque Howth village.

The houses, designed by McCrossan O’Rourke Manning architects, have about 312sq m/ 3,358sq ft of space and are 25 metres wide from boundary to boundary. With imposing solid granite-framed doorways, there is a supersized US quality about them. Inside is no different with ceiling heights of 9ft and taller than standard windows. Off the wide-tiled hallway are two reception rooms of equal size, presumably one for formal entertaining and the other for a den or playroom space.

Each has a sealed woodburning fireplace with working chimney – required, along with a sophisticated heat recovery system, to achieve an A energy rating. Cosgrave says they have learned from the energy efficient homes built at their Honeypark Dún Laoghaire scheme, that annual energy costs should be about half of non-A rated houses. “That’s a small holiday, when you think about it.”

The living-dining area in the showhouse has been kitted out by Brian S Nolan (who have been styling Cosgrave’s interiors since 1983) showcasing the sizeable 600sq ft space to good effect. Light pours through a corner arrangement of French windows at the living end, while the kitchens are fully fitted with hardwood cabinets, polished quartz worktops and double oven and built-in fridge and freezer. There’s even a second fridge in the adjoining utility room, and direct access from there to the wetroom for mucky returns from surrounding playing fields.

Upstairs, five large double beds are arranged around the central landing. The master, at 430sq ft and with custom built dressing room and roomy en suite, is bigger than some apartments. A further two doubles have en suites, and all have built-in wardrobes.

As to the asking price of between €1.4 million and €1.6 million through agent David Lawlor of Hooke & MacDonald, Cosgrave is confident.

“Compared to second-hand houses in this area that would need further spend on modernisation, there’s value there. Especially when you consider annual energy savings in these homes of around 50 per cent.”

At the height of the boom Cosgraves (the business comprises brothers Joe, Peter, Michael and Willy) were bringing about 600 properties to market annually. Then came the wipeout, followed by Nama, followed by a long slow rehabilitation. In the commercial space a flagship Cosgrave development was its Georges Quay scheme. Due to asset disposals it was sold last year – prematurely some would say – for an estimated €200 million. Today’s valuation would place it closer to €250 million.

Working with Nama, the Cosgraves were one of the first builders back onsite when they started their 880-unit Honeypark scheme on the site of the former Dún Laoghaire golf club in 2011. By the end of this year they will have sold 400 of them, and they have just started selling Bracken Park, a 150 unit scheme in Castleknock. Honeypark has its own Tesco and Boots and there are still another 1,500 units to be built on the surrounding lands.

Joe Cosgrave says they are working through the debts with Nama and he remains sanguine. It’s not how he would have wanted it to be but he’s happy to be bringing people back on site. “We didn’t see it coming and when it did, we just had to respond. We’re happy to be building a 100 units or so a year, we’re meeting our targets and working down the loan. It’s all going in the right direction.”

Life as a carer: When a child’s diagnosis means ‘a disease for life’
9

Róisín Ingle: The resilience of my children has taken my breath away
10