The fine art of furniture design by Cillian Ó Súilleabháin 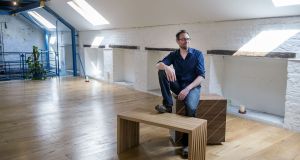 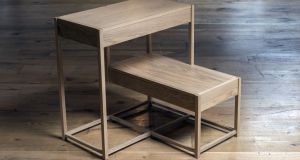 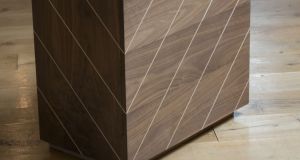 Furniture makers know the transformative potential of timber. When two dangerous old cherry trees in the family home in Blackrock were felled, Cillian Ó Súilleabháin turned them into a modern hall table called Courtlands, a Christmas present for his parents. It was the first special piece of furniture made by this craftsman, one of Ireland’s leading furniture designers who is scooping up awards for his work. Today a refined variation of this angular piece in oak and maple, whose form was originally dictated by a specific place in the hall, typifies his minimal and meticulous geometric style.

“I am very comfortable with geometry,” he says when we meet in Dublin where he is currently looking for studio space, having moved from Carlow. “It’s what my brain does. I find the simplest shapes the most attractive, but when something is so minimal it has to be perfect so anything wrong would show.” He points to one of his signature pieces, a simple but exquisitely finished chest of drawers in walnut and oak whose precise dimensions were determined by the pattern of the inlay. Called Tetrahedra, it was selected by Wallpaper magazine for its 2014 showcase apartment feature.

Flagged by Elle Decoration as one of three Irish designers “tipping for the top in 2016”, Ó Súilleabháin was named Ireland’s Future Maker of the Year in 2015 by the Design and Crafts Council of Ireland, the same year he was selected for Portfolio as one of the 22 Irish makers “representing the leading edge of contemporary craft and design in a world-class context”.

Such acclaim has followed years of hard work and a background that started with a degree in mechanical engineering from Trinity College Dublin. “We are a very practical family so I went down the engineering route,” he explains, adding that growing up he always loved making things – tree houses, tables or ramps for his bikes.

With Woods, he got his first schooling in the trade of cabinet making – how to use and sharpen knives, the precise cutting of mortise and tenon joints, dove-tail joints and old techniques like inlay and veneering along with spray painting MDF wardrobes and sideboards. “Making something every day and solving problems, that’s learning.”

He stayed there for two years before moving to work with noted furniture maker Stephen Ó Briain in Carlow, whose background was originally in fine art painting and from whom he learned a “ridiculous” amount. There he developed his first appreciation of design, working on contemporary office furniture and large conference tables. In October 2011, he eventually set up his own studio, “fairly blindly” heading into what he describes as a “brutal” period in which he barely eked a living. “I had no reputation, nothing people would trust so I focused on getting my work seen and went after any award.”

One interesting commission at the time was five dinner tables for Borris House from the estate’s hedgerow oak forest – this necessitated going through 200 planks of seasoned wood to find the five needed for the tables. Another was from a woman in Dublin who brought him a mahogany table of sentimental value which she had inherited but didn’t particularly like. He made her a new console table from the old wood: “It was the most satisfying piece I have ever made. I love the challenge of restriction.”

Another client who had seen his work in Project 51 in South William Street (now closed) ordered a round-top table and a storage container and when he delivered the table hugged it. “I love to do something over which you have total control. I am not precious about the work and love the personal relationship [with a client]. For me, the design, the form, the precision of the make is what is important. If people want a set of shelves I can make that. What matters most is giving people what they want. I am a collaborator by nature.”

Another significant association has been with Welsh designer and artist Louise Hibbert with whom he has exhibited a variety of cabinets in London in walnut and maple, furthering his love of collaboration.

Purity of form and the importance of function inform his aesthetic and he is drawn to the principles of Bauhaus and the designs of German-born American artist Joseph Albers, a leading proponent. “His designs make sense to me and the engineer in me means that if something doesn’t work, it is bad design.”

Ó Súilleabháin’s work has been featured in a variety of galleries and shows in Ireland and the UK, including the flagship interiors expo, Maison et Object in Paris, Tent in London and the Hunt Museum in Limerick. Success means “the phone rings all the time now and I am confident and secure for the first time”, he says. His favourite tool is a plane because of the sharpness and smoothness it brings to wood and to be able to wield it properly is a delight. “More and more, the wood I use is dictated by design so now I look for the wood that suits it. Wood can be contrary. There are no absolutes with it. It wants to move and breathe because it is a natural material and a good maker knows how to make something with that respect for the timber.”