Me and My Garden: Ross Flanagan 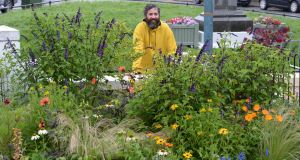 Take one teeny-tiny city front garden, a family dog, two energetic toddlers and their young parents – one who is an absolutely passionate gardener, the other who emphatically is not – and what have you got? “Let’s just say that it’s an ongoing turf war between myself and my wife, Emma, as to how much of the garden I can use for my plants versus how much is kept as a lawn for our sons to play on,” says Ross Flanagan, who lives with his young family in Harold’s Cross, Dublin. “Initially she tried to persuade me to use a very narrow strip next to the garden boundary wall. But there was no way I was falling for that, as it’s too shady. So eventually we agreed on a small sunny strip next to the garden gate. The deal was that the bed could be no more than 2m long and 1m wide but I’ve been sneakily adding to it ever since I started planting it up last year; it’s probably twice that now.”

Filled to bursting point with a mix of annuals, perennials and shrubby species, including golden and orange marigolds, lofty dahlias, bee-friendly salvias, monarda, the cheery yellow daisy flowers of Rudbeckia ‘Goldsturn’, silver-leaved artemisia (the compact variety known ‘Mori’s Strain’) and wispy Mexican feathergrass, this 2m by 2m strip has become Flanagan’s garden laboratory. It’s where he experiments with plants, studies their different growth habits, watches how they interact and gets to play with colour, texture and form.

I’m completely addicted to propagation. Getting seeds to germinate or getting a cutting to successfully root … it’s magical

“It’s a very small space, but that doesn’t mean the plants have to be small. Instead I’ve gone for plenty of height and volume and lots of really vivid colour. Plants like Salvia ‘Amistad’, for example, which produces its purple flower spikes from July to October and Salvia ‘Guanajato’, which has the most amazing, brilliant blue blooms.”

He’s somehow also managed to squeeze in an eastern redbud (the ornamental foliage shrub properly known as Cercis canadensis), echinacea (the pale-flowered variety known as ‘White Swan’), a collection of jaunty plum and orange-coloured dahlias, purple agastache, claret-coloured cosmos and even his very own tree dandelion, Sonchus fruticosus. The result is a brilliantly zingy, joyful, jungly, slightly wacky combination of plants that brings a smile to the face of everyone who sees it. “Passers-by often stop to compliment me or to ask about the planting; I suppose it’s a little different to your typical front garden.”

Impressively, every single plant in it was hand-raised by Flanagan from seed or cuttings. “I’m completely addicted to propagation. Getting seeds to germinate or getting a cutting to successfully root … it’s magical. Initially I kept my electric propagator on the kitchen table until Emma eventually banished it to the porch, which was fair enough. So then I got myself some grow-lights to boost the light levels.” How did his wife feel about that? “She’s been very good about it actually,” he says cheerily, “just so long as I keep to my half of the porch.”

He also keeps a garden diary in which he records everything. “Names, dates, different methods of propagation. It’s a bit geeky but it’s the best way to learn … At the moment I’m experimenting with a range of different growing mediums – compost, perlite, horticultural sand – to see which give the best results for cuttings. It’s fascinating.”

Flanagan’s love of gardening was first fuelled by an evening course on kitchen gardening given by Aoife Moon in Marlay Park six years ago. “I dipped my toes in the water, so to speak, and discovered I really enjoyed it. So then I took on an allotment in Friarstown, which I loved. But when our first son, Louis, arrived I just didn’t have enough time to properly look after it and my dad took it over.”

As his love of gardening grew, in 2016 Flanagan decided to enrol as a part-time student at Blanchardstown (TU Dublin) to study horticulture, juggling his studies with his full-time job with Dublin City Council. He graduated earlier this year with a diploma in amenity horticulture. “I am that stereotypical career-changer, that person who’s spent too long sitting at a desk indoors under fluorescent lights doing a job that they’re not passionate about. My dream is to change that.”

He now works as a volunteer one day a week at Hunting Brook Gardens in Co Wicklow. First sent there on student placement, he was blown away by this experimental country garden from the minute he walked through its gates. “By the plants, the planting combinations, the design – I’ve learned so much from Jimi Blake [its owner], who has been an important influence in many ways.”

Meanwhile Flanagan’s steady colonisation of his family garden has entered a new and deeply symbolic phase. When the government announced lockdown in March, he took up his spade and headed outside to start digging up his tiny back garden, up until then a patch of lawn reserved for his children. “He was like a man possessed. I just didn’t have the heart to stop him,” says Emma ruefully.

“I saw the time off work as the perfect opportunity to create a beautiful family garden for us all to enjoy,” says Flanagan. He sketched out a plan that included raised beds, a sunny, paved area and a tiny gravel garden. It was only when he had finished the initial excavation work that it dawned on him that he had no way of getting his hands on the building materials required to complete the job. By the time the restrictions had lifted and building suppliers and hardware shops had finally reopened, Flanagan was long back at work. For now, the back garden remains a work in progress or what his very patient wife describes as a building site. But he’s already begun propagating lots of new plants to fill the space. “I’ve promised Emma that it’s going to look amazing when it’s finished.”