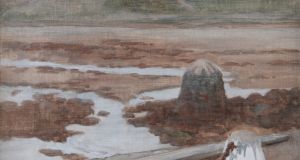 Two forthcoming Irish art sales will feature a great mix of contemporary and period artworks from both Irish and international artists.

Adam’s on St Stephens’s Green will hold its Important Irish Art auction on June 12th, to include A Portrait of Florence Forsyth by Gerald Leslie Brockhurst.

By the 1940s, Brockhurst was the most expensive portrait painter in Britain, charging 1,000 guineas for an oil, and limiting the number of commissions he would accept to 20 per year.

His signature portraits have increased in value in the auction market over the past few decades. In 1999 his portrait of The Duchess of Windsor achieved $95,000, while his unfinished canvas of Marlene Dietrich achieved £67,250 in 2008, both through Sotheby’s. Last year a record was set for his work, when the portrait of Hollywood star Merle Oberon sold through Heritage Auctions in Dallas for $290,000, multiples over its $40,000-$60,000 guide. The estimate for his portrait in the Adam’s sale is €20,000-€40,000.

In 1945 Jack B Yeats wrote a letter to Mrs Brenda Williams of Tullamore in which he stated that Low Water, Spring-Tide, Clifden was his very first oil painting. The painting, executed in 1906, was purchased by Brenda’s father – the surgeon and writer Oliver St John Gogarty – the same year and comes with the artist’s original letter to Mrs Williams (€40,000-€60,000).

The sale also features CúchulainnVIII, a Louis le Brocquy tapestry that graced the walls of the Shelbourne Hotel for 25 years (€30,000-€50,000).

De Vere’s also lists Le Brocquy’s watercolour Tinker Picking Whitethorn (€40,000-€60,000). The work was last sold by the National Asset Management Agency (Nama) through Christie’s in 2013 for £32,500, as it had been seized from financier Derek Quinlan in a bid to offset some of his debts.

Irish artist Seán Keating also features in both sales: in Adam’s sale, Homeward Bound is a large oil of six Aran Island men in their traditional currachs. The late work is signed in both English and Irish by the artist (€60,000-€80,000). De Vere’s is listing Keating’s Irish Gothic, described by Dr Éimear O’Connor “as a pendant to his previous work Irish Romanesque”. Keating based the woman in the painting on his sister Vera, and as she died within two years of its completion, the artist saw this painting as a tribute to her (€20,000-€30,000).

In the world of sculpture, Adam’s has Edward Delaney’s Cathedral, a monumental bronze work by the artist best known for his Famine memorial on St Stephen’s Green (€15,000-€25,000). De Vere’s lists Portrait of a Dreamer by Rowan Gillespie. Extending to more than 7ft tall, this work is a tribute to John Lennon (€40,000-€60,000)

Finally at De Vere’s sale, artist and sculptor Patrick O’Reilly will unveil his latest creation: GI Bear, an 8ft-high sculpture inspired by a second World War photograph of a soldier carrying a donkey on his back, which is the top lot at the auction (€80,000-€120,000). See adams.ie and deveres.ie