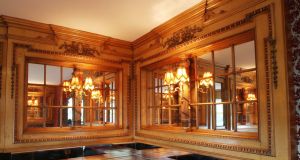 A section of the HMHS Britannic’s second-class library maple panelling, in a colonial Adams-style design.

Saturday, May 11th, Sunday, May 12th, Matthews Auction Rooms, Oldcastle, Co Meath. (This auction has been postponed from May 4th and 5th) The contents of Rostellan House, Dublin 6 and other clearances, to include over 1,000 lots. See matthewsauctionrooms.com

Friday, May 24th, Christie’s London Science and Natural History sale to include a near perfect, rare skeleton of a dodo bird dating from pre-1690, (£400,000-£600,000). The last accepted sighting of the now extinct bird was recorded in 1662 in its native Mauritius.