Jackie Kennedy silk maternity dress up for auction in Dublin 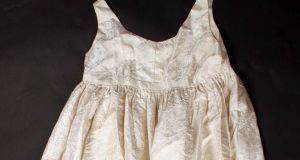 Jackie Kennedy’s silk maternity dress, worn in 1960 while she was pregnant with John Kennedy jnr 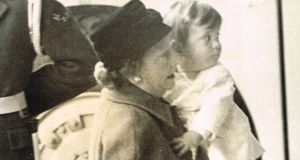 A silk “maternity dress” worn by Jackie Kennedy in 1960 has turned up in an auction of historical memorabilia in Dublin and is expected to sell for up to €4,000 at auction next month. The dress was among personal effects given by Ms Kennedy to the White House nanny, Englishwoman Maud Shaw.

Ms Shaw was nanny to the Kennedy family from 1957 until 1965, when she retired home to England. She famously looked after the Kennedy children immediately after the assassination of their father, John F Kennedy, in November 1963.

Whyte’s auctioneers in Dublin’s Molesworth Street said the dress would be sold, along with 79 photographs of Ms Shaw’s time with the Kennedys, as a single lot in the auction with a top estimate of €4,000.

Ms Kennedy wore the dress while pregnant in 1960. John F Kennedy jnr was born in Washington in November that year, a fortnight after his father was elected president of the United States.

The dress was given by Ms Kennedy to Ms Shaw on a visit to London in 1965. She recounted receiving the dress and other mementos in her book White House Nannie: My Years with Caroline and John Kennedy, Jr.

Ms Shaw, who was unmarried, left the position with the Kennedy family and returned to live in England in 1965. She died in 1988. Her Kennedy mementos were inherited by relatives and subsequently sold off. Whyte’s said the dress had been consigned to its auction by an unnamed private collector who had bought it from the Shaw estate.

Whyte’s said the dress had “no label indicating size or maker’s name” but was of “fantastically high quality”.

Ms Kennedy was renowned for her style and for wearing European haute couture, which attracted public criticism. In 1960, she said: “A newspaper reported I spend $30,000 a year buying Paris clothes and that women hate &#60;http://en.wikiquote.org/wiki/Hate&#62;me for it. I couldn’t spend that much unless I wore sable underwear”.

However, to assuage public opinion, she increasingly switched to American fashion designers. Her most famous outfit – a pink suit she was wearing in Dallas, Texas, on the day her husband was killed – was a Chanel-style suit made by a New York clothing company, Chez Ninon on Park Avenue.