Dalí’s surreal dream pieces in the gardens at Russborough 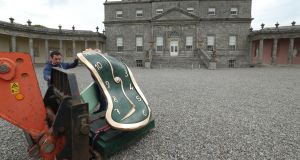 Mad man, con man or genius? The jury is still out on Salvador Dalí, the Spanish surrealist painter and master of self-promotion, whose largest collection of works ever seen in Ireland are now on display at the Art in the Garden exhibition at Russborough House in Co Wicklow.

Believing himself to be the reincarnation of his elder brother, who died when the artist was just nine months old, Dalí eschewed drugs to transcend to a hallucinogenic state – unlike many of his surrealist contemporaries – with the retort “I don’t do drugs – I am drugs”.

Known for his idiosyncrasies, he almost suffocated while delivering a lecture wearing a diving-bell suit flanked by two Russian wolfhounds – the audience thought it was all part of the theatrics – and he once drove from Spain to Paris in a Rolls-Royce filled with 500kg of cauliflowers, just for the hell of it.

After his death in 1989, it was revealed that Dalí once sent Yoko Ono, John Lennon’s wife, a dried strand of grass with a bill for $10,000, as she believed it to be a wisp from the artist’s beard. Dali feared Ono would use his real beard for occult purposes.

The selection of works include two of his large scale museum pieces, Dance of Time III and Lady Godiva with Butterflies, which are located in the garden against the remarkable backdrop of the 300-year-old Palladian mansion.

Dance of Time III, a wax cast bronze, echoes his most famous painting The Persistence of Memory, better known as Melting Clocks, which hangs in MoMa in New York. Critics surmised that his melting clocks, or soft watches, were an interpretation of Einstein’s theory of relativity. Not so. The artist explained they were simply a surrealist perception of Camembert cheese melting in the sun.

The remainder of his works, all of which are for sale, are located in the hippodrome at Russborough – the horse training ring constructed 200 years ago, and the only one of its kind in the country.

The exhibition, curated by Gormley’s Gallery, also has a selection of Irish and international sculptures which sit comfortably with, and are as interesting as Dali’ work.

Secondly is the beautiful She Stag, a towering weathered steel woman with an antler crown: “It is a two-spirited character that exudes both love and strength, vulnerability and fierceness. It bears a bronze concave heart which represents the act of receiving love and reflecting it back,” says de Brí, whose public works feature at Dublin Castle and the University of Limerick.

Other artists include Ian Pollock, Patrick O’Reilly and Peppe Perone. Admission to the Art in the Garden exhibition is free, and runs until June 2nd when it will move to the Culloden Hotel in Belfast, June 15th-30th. Prices range from €300-€80,000.

No doubt Dalí would have been delighted to see his works displayed at Russborough which is reputed to be the longest house in Ireland. But you’d wonder what the resident ghost, which is said to haunt the bedrooms, makes of all the shenanigans on his front lawn. See gormleys.ie