The French count burned through $10 million of his American heiress wife’s fortune. Their treasures are for sale for the first time in over a century 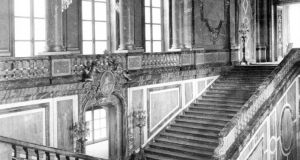 The Palais Rose, a pink-marble reproduction of the Versailles Trianon, was the last of the belle époque palaces, an the scene of many lavish soirees. 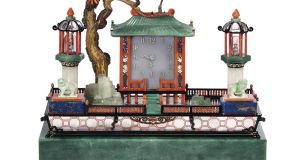 A nécessaire de bureau designed by the great jeweller Louis Cartier, expected to sell for between €1 million and €1.5 million 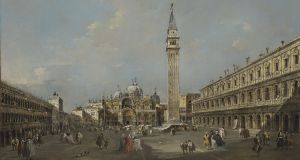 Francesco Guardi’s painting of the Piazza San Marco in late-afternoon shadow, expected to fetch between €4 million and €6 million

The 1895 marriage of the American railway heiress Anna Gould to the French count Boniface “Boni” de Castellane was the quintessential meeting of Old World aristocracy and New World money, as recorded in the novels of Henry James and Edith Wharton.

Anna’s fortune doubtless compensated for her plain looks. She chose charming, handsome Boni, who dabbled in politics, from a number of suitors. He then set about dilapidating her dowry. Ten million dollars was a lot of money at the end of the 19th century.

They commissioned the last of the Belle Époque palaces, a pink-marble reproduction of the Versailles Trianon, on the corner of what is now the avenue Foch (where the Irish embassy is located) and the avenue Malakoff. The de Castellanes’ Palais Rose was the scene of the most lavish Belle Époque soirées.

Boni decorated the Palais Rose with the fervour of a Florentine prince. He bought Gobelin tapestries, portraits by Rembrandt, Reynolds and Van Dyck, a 13th-century carpet from Lisbon cathedral, and a clock which Louis XIV had given to the Pope. Ornate 18th-century furniture made by André-Charles Boulle was one of his greatest weaknesses.

“I was driven by passion as strong as that of some players for cards,” Boni wrote in his memoirs, titled The Art of Being Poor. He called his gluttony for fine antiques “my slide into the abyss”.

Boni “launched the age of celebrity, what the French call ‘people-isation’,” says Eric Mension-Rigau, professor of contemporary history at the Sorbonne and Boni’s biographer. Caricatures of Boni appeared often in the French press. Jacques-Émile Blanche and Kees Van Dongen were among the artists who painted his portrait.

Anna and Boni “were the best example of French aristocracy marrying uncouth Americans stuffed with money”, says Lionel Gosset, director of collections at Christie’s. He believes buyers will be interested “because all these objects were bought between 1895 and 1906 and are reappearing on the market in 2017. Being off the market for more than 100 years gives them a kind of virginity, with wonderful tales of their provenance.”

Estimates range as low as €400 for a late-19th-century watercolour titled Le Rendez-vous to between €4 million and €6 million for Francesco Guardi’s exquisite painting of the Piazza San Marco in late-afternoon shadow. It hung against a green silk background over Diane de Castellane’s sofa in her last home in Paris’s La Muett e district.

Some items were acquired after Anna expelled Boni from the Palais Rose in 1906. In 1926, Anna commissioned a nécessaire de bureau from the great jeweller Louis Cartier. It is designed to look like a pagoda in an oriental garden, in which the diamond-encrusted clock hands meet to form a dragon, and “shishi” stone lions serve as lids on inkwells. Made of coral, jade, rock crystal, pearls, lapis-lazuli, mother-of-pearl, lacquer, diamonds and enamel, the piece is expected to sell for between €1 million and €1.5 million.

Equally unique are a pair of egg-shaped Sèvres porcelain “ornaments” from the late 18th century, with a blue-and-gold fluted surface, estimated at between €80,000 and €120,000.

Fragonard’s round oil painting of The Happy Household, in which a child crawls on his father’s lap while the mother stands by, tenderly holding her husband’s hand, is a touching portrayal of Fragonard’s own family life around 1783, estimated at between €500,000 and €700,000.

Boni wrote of Bouboule’s “tender character” and the way the dog looked up at him “with expressive, loving eyes that touch me to tears”.

For Anna had wearied of Boni’s infidelity and spendthrift ways. She obtained a civil divorce in 1906, then forbade Boni from seeing his children.

“He was a wounded man,” Gosset says. “He found himself penniless, as before his marriage . . . He always lived beyond his means. When he had 1,000 francs in his pocket, he spent 10,000. He died owing money to his florist, shirtmaker, tailor. He had debts everywhere, always.”

Despite his bad habits, Boni was a devout Catholic. He tried for years to obtain an annulment of the religious marriage, presumably so he could remarry. In 1924, the highest Vatican tribunal upheld the validity of the marriage and denied the annulment.

Boni’s fine taste turned out to be his salvation. He established himself as an antique dealer, specialising in advising American millionaires. They eventually enriched US museums with their collections.

Boni died at the age of 65, ever the epitome of a French aristocrat.

With her second marriage, Anna went from being a countess to a duchess. When she died, aged 83, Time magazine eulogised her as “one of the first of the American heiresses whose marriages infused new blood – and new money – into Europe’s sagging aristocracy”. The obituary recalled her marriage to Boni de Castellane as “an 11-year phantasmagoria of pink marble palaces and $150,000 parties during which the Parisian gay blade skated through more than half her inheritance”.