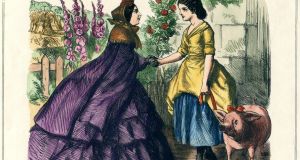 Queen Victoria meeting an Irish colleen: from Punch magazine in 1861 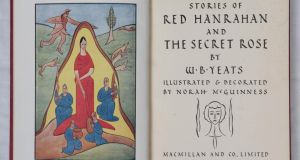 Red Hanrahan and The Secret Rose by WB Yeats illustrated by Norah McGuinness, first edition from 1927 (€325)

Collectors of rare and antiquarian books are increasingly using the internet to search for, and to buy, so traditional catalogues are now generally published both in print and online. Like traditional second-hand bookshops, the catalogues are filled with the most unexpected and interesting titles accompanied by extensively researched background notes and are a great read in their own right.

The autumn catalogue from Galway-based Healy Rare Books contains 665 “rare, unusual and desirable items” for sale described over 152 pages with numerous illustrations. The selection of intriguing books and manuscripts will interest collectors certainly but also appeal to anyone looking for a unique gift. Is there a marine biologist or deep-sea diver in your life? How about a “scarce” set of tinted folding maps along with a Report on the Shell-fish Layings on the Irish Coast, as Respects their Liability to Sewage Contamination – 148 pages, published in Dublin in 1904 (€480).

A rare 1790 Dublin edition of the 18th century travel book sensation Travels to Discover the Source of The Nile by Scottish writer James Bruce – famously described by a reviewer as “the truth, the whole truth, and nothing but the truth” – is €1,750.

Among numerous Irish travel books is The Stranger in Ireland; or, A Tour in the Southern and Western parts of that country in the year 1805 by John Carr (€1,250); and A Little Bit of Ireland by Louise McKay published in London in 1927 (€125).

Collectors interested in researching the amazing libraries that once graced Irish country houses will find a selection of old auction catalogues including Christie’s: Sale of Library of Books, Adare Manor on 10 June, 1982 (€150).

A real curiosity is an undated Provincial Bank of Ireland Limited – Rules for Officers. No. 200. Private and confidential which reminds staff that “officers with salaries below £150 per annum are not permitted to marry” and that bankers are “not permitted to overdraw their accounts without permission of the Directors” (€195).

A first edition of Red Hanrahan and The Secret Rose by WB Yeats (pictured), published in London by Macmillan in 1927, may also appeal to art collectors as it’s illustrated by Norah McGuinness (€325).

The autumn catalogue from De Búrca Rare Books in Blackrock, Co Dublin includes some 350 books, manuscripts, cartoons and photographs. Highlights include an “exceedingly rare book” – a 17th Italian publication of “all that was factually known about St Patrick” – described as “the Moses of Ireland”.

Il Mosé dell’ Ibernia vita del glorioso S Patrizio . . . Apostolo, e Primate dell’ Ibernia is by Giacomo Certani, professor of Moral Philosophy at the University of Bologna. Only five copies of this book, published in Bologna in 1686, are known which explains the price of €1,275 . Among the illustrations is St Patrick (better known for ridding Ireland of snakes] actually banishing winged devils from the country.

The national saint’s good works didn’t, however, prevent the 17th century events chronicled by Thomas Waring in A Brief Narration of the Plotting, Beginning & Carrying on of that Execrable Rebellion and Butcherie in Ireland. “With the unheard of devilish-cruelties and massacres by the Irish-rebels, exercised upon the Protestants and English there” – of which an “extremely rare” copy, dating from 1650, is priced at €1,250.

The truly eclectic nature of the catalogue is the juxtaposition of utterly incompatible subjects exemplified by the “profusely illustrated” Showband Folk and Beat Annual 1968, which includes articles on the Miami showband and a piece headlined “Bigger they are – easier to handle”, by Jimmy Magee, for €225.

Described as “very rare”, Oppressions and Cruelties of Irish Revenue Officers, published in 1818 by the Rev Edward Chichester, sounds like it could become a bestseller in the 21st century (€375).

Among a fascinating selection of political cartoons is one from Punch magazine published on August 31st, 1861 captioned “Doth not a meeting like this make amends?” which shows Queen Victoria shaking hands with an Irish colleen and proclaiming “My Dear Ireland, How much better you look since my last visit. I am so glad!” (pictured, €125).

Queen Victoria’s much-documented visit to Co Kerry sparked Ireland’s first tourism and a spate of travel books including A Walking Tour Round Ireland in 1865 by “An Englishman” [William Whittaker Barry] (€375).

Coronavirus: Where should you sit on a plane to avoid infection?
7

Soreness is good, scales are pointless: The 10 biggest myths in fitness
9