Art by Bono for auction

Limited-edition prints of U2 star’s art in Dublin auction 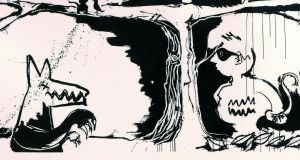 Jack B Yeats, Sir William Orpen, Seán Keating, Colin Middleton, Mary Swanzy and, eh, Bono? The U2 star is among the artists in Morgan O’Driscoll’s auction on Monday. Lot 188 is a set of limited-edition prints of the drawings made by Bono in 2003 to illustrate “a new interpretation of Prokofiev’s Peter and the Wolf by Gavin Friday”.

The original drawings/paintings by Bono were sold at a charity auction, to raise funds for the Irish Hospice Foundation, at Christies’ in New York 10 years ago amd made $368,000 (€283,000).

The prints, and more than 200 other lots, go on view from noon today at the Clyde Court (formerly Berkeley Court) Hotel in Ballsbridge where the auction takes place on Monday at 6pm.

A small early painting by Jack B Yeats, titled Hot Weather/Hot Day and dating from 1913, is from a private Dublin collection and is appearing at auction for the first time. The oil-on-board , measuring just 18cm by 28cm, is estimated at €30,000-€60,000.

Life is busy. This can be difficult for a new vegetarian such as me
4

‘Sadly my marraige ended, but it was the kick I needed to start my own journey’
Real news has value SUBSCRIBE