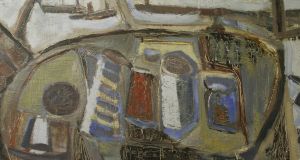 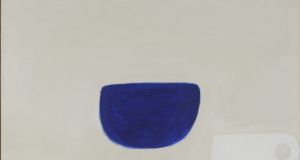 Still Life (1973), by William Scott, the Scottish artist who grew up in Northern Ireland. 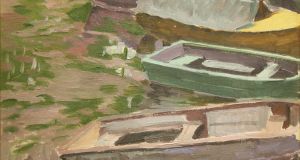 Boats at Low Tide, made in Dorset circa 1948, by William Leech. 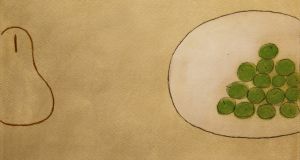 Most art collectors, sadly, never live to see the financial value of their life’s passion realised. But, happily – and rightly – most people buy art for pleasure rather than fretting about its long-term worth. Eventually, however, most private collections are broken up and sold off. Auction salerooms around Ireland are filled with the estates of the deceased as items which were bought for pleasure – or investment – are sold off to benefit heirs. Last year, Michael Carroll, a former banker with AIB Bank and a well-known private art collector, of Dalkey, Co Dublin, died and now 74 pieces from his collection – with a combined top estimate of €350,000 – are to be sold in a de Veres Irish Art Auction which takes place on Tuesday evening (April 4th).

A catalogue note describes Mr Carroll as “a voracious collector, always on the lookout for new pieces, but within the constraints of a modest budget. The walls of his and his wife, Ita’s Dalkey home were hung salon-style, the walls tightly-packed to accommodate the works acquired slowly over decades”.

But apart from his own collection, Carroll was also instrumental in assembling one of modern Ireland’s most important corporate collections of art for AIB.

According to Frances Ruane, the academic and economist who was hired by AIB in 1979 to advise the bank on its art acquisitions policy, Carroll was “one of the executives in AIB who initially promoted the idea that people who worked in the bank should be able to enjoy art in the workplace [and] . . . had a kind of missionary zeal when it came to spreading the word”. He was “fascinated by artists, getting to know them and trying to better understand the way they thought” and his friends included the painter Tony O’Malley, who had begun a career in the bank before leaving to paint full time.

In the last quarter of the 20th century, the AIB art collection grew to number more than 3,000 pieces valued at up to €12 million.

However, following the banking crisis of 2008, and the subsequent, effective nationalisation of AIB, the key pieces in the collection – including paintings by Jack B Yeats, Paul Henry and Sir John Lavery – were handed over to the State and, following a government decision, given permanently to the Crawford Art Gallery in Cork.

But Dr Ruane said Mr Carroll continued with his own private collecting and “acquired art, lots of it”.

He bought mainly 20th-century Irish art – over many decades – principally from The Dawson and the Taylor Galleries in Dublin.

As a gesture to this long association, the auction viewing will, therefore, take place at The Taylor Galleries, 16 Kildare Street, from 11am today. The sale itself will take place on Tuesday evening in the Royal College of Physicians, 6 Kildare Street at 6pm. Online bidding is also available via deveres.ie

Commenting on his private collection Dr Ruane said Mr Carroll was “open to any genre, looking for gems in any style or medium” and that “ one can only hope that prospective buyers will match his passion. These much-loved pieces came from a ‘good home’ and they deserve another.”

Apart from the Carroll collection, there is a total of 160 pieces of art and sculpture in the auction and the top estimate is for Lot 96 – a Jack B Yeats painting entitled From the Woods Shadow, which depicts a barefoot boy wandering through the Phoenix Park, and is estimated at €80,000-€120,000. The painting is being sold by a descendant of Frank and Constance Vickerman – English friends of the artist, who were regular visitors to Ireland where they also bought art – in another classic example of a privately-owned art collection being dispersed.