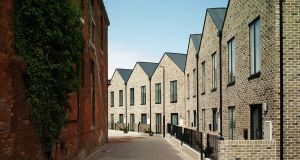 The layout consists of a terrace of four gable-fronted houses and the pair of longer, thin houses on Kelly’s Avenue and six houses to the rear.

Given the current housing crisis in Dublin, with so many people living on the edge, few could be happier than the social housing tenants who recently moved into 12 new “rapid-build” homes sandwiched between Kelly’s Avenue and Stable Lane, just yards from Dún Laoghaire’s majestic harbour.

The scheme, designed by Dún Laoghaire-Rathdown County Council’s architects, is not only a fine addition to the eclectic mix of housing in this sought-after area, but every one of the new houses has a BER (building energy rating) of A1, which means that utility bills should cost little more than €200 per year.

Contrary to popular mythology that there’s something substandard about the rapid-build housing, all of the houses have triple-glazed windows and are mechanically ventilated to provide a high degree of comfort all year round. With crisp architectural detailing, they have not been “lashed up” in any way.

Indeed, the scheme has already won a silver certificate from the Irish Green Building Council, registering the highest score so far for multi-unit housing. IGBC chief executive Pat Barry said the rating “highlights that quality and sustainability are about choices, design and skills, and do not involve extra costs or time.”

The wedge-shaped site, previously occupied by a council depot, was an obvious candidate for development given its proximity to Dún Laoghaire’s main street and the harbour area. It also required architectural ingenuity to pack quite dense housing into less than half an acre without making it look crowded.

“It’s a new piece of urban fabric,” says senior architect Bob Hannan, who headed the design team. “Our model was the back-to-back housing in Stoneybatter, and we managed to reduce the standard clearance of 22m at the rear by using windows at oblique angles to ensure a degree of privacy for people.”

Two of the 12 houses are long and thin, just one room deep, and have no windows at the rear, but there’s still plenty of light because those on the front are generous in scale. Closer to the harbour, this pair are also rendered and painted white, in line with the traditional treatment of Victorian seafront houses in the area.

The remaining 10 houses are gable-fronted and clad in warm-coloured brick on timber frames, with zinc roofs. “I always wanted to do gable-fronted houses,” Hannan says. And in this case the choice was not capricious, as the former 19th-century wash house and abattoir on Kelly’s Avenue also has a gable front.

Not that Kelly’s Avenue is much of an “avenue”. Unlike Griffith Avenue, with its double lines of trees and grand houses, the Dún Laoghaire version is a relatively narrow street, fronted by miscellaneous housing from different periods. But maybe it’s this variety that makes it quite an attractive little residential enclave.

A classic “brownfield site”, its redevelopment contributes at least in a small way to achieving the three principal aims of Dún Laoghaire’s urban framework plan: to reconnect the town centre with the waterfront, to create more vitality in the area and to strengthen links with adjoining areas undergoing redevelopment.

The layout consists of a terrace of four gable-fronted houses and the pair of longer, thin houses on Kelly’s Avenue and a further six houses to the rear, on Stable Lane, a cul de sac that is to be extended towards Crofton Road. Each of the two-bedroom houses has a narrow front garden and a parking bay on-street.

They are within easy walking distance of the Dart station and bus stops as well as the harbour and main street, which makes one wonder why they all needed individual off-street parking bays for cars. Right on the corner of Crofton Road, just metres away, is Scrumdiddly’s ice cream shop.

Tiny gardens were “pre-planted” with a shrub or two while trees have been used to “soften” the parking bays. Kitchen windows extend downwards almost to floor level to admit more daylight and also to provide passive surveillance of the area, including an outdoor “home zone” where children can play.

Built at a cost of €249,000 each (including VAT), the scheme took 21 months to deliver, from the initial design stage, which involved Bob Hannan collaborating with A2 Architects, through the tender stage, when the contract was awarded to Sisk, which also had its own consultant architects, O’Mahony Pike.

Of course, a dozen new social housing units in Dún Laoghaire represent a mere drop in the ocean compared with what’s needed. But Hannan says the influx of new residents into this and other residential developments in the vicinity is driving the Lazarus-like revival of once sadly rundown George’s Street.

Plans are being made for another small social housing scheme on a vacant site behind the former fire station on George’s Place. Nearby, a big gap on Crofton Road, where the surface car park of St Michel’s Hospital is located, is slated to be redeveloped for an apartment block, five or six storeys high.

Dún Laoghaire-Rathdown County Council has several other social housing schemes under construction or due to start soon, including 14 at Rochestown House in Sallynoggin, 44 at Rosemount Court in Dundrum, 21 at Broadford Rise in Ballinteer and 50 at redeveloped Fitzgerald Park in Mounttown.

In addition, the council will soon go to tender for 155 houses on Enniskerry Road, 11 at Abbey View House in Rarhfarnham and 42 at Loughlinstown Wood. But with nearly 5,000 applicants for social housing on its waiting list, it will take a considerable length of time to provide homes for people in need.