A third-generation Stoneybatter cottage sees the light at last 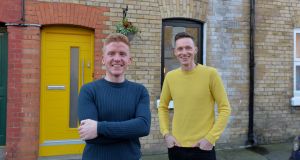 Craig Dwyer and Paul Franey (he bought the house from his Grandad) on Viking Road, Stoneybatter. Photograph: Alan Betson / The Irish Times

While many of us like the idea of living in a property that has been handed down through generations, in reality, a legacy home is likely to have issues – and will probably be in need of a through renovation to make it relevant for the next generation.

Paul Franey, from Rathfarnham, had great ideas when he bought his grandfather’s house back in 2005 and, after mulling over his refurbishment plans for several years, he eventually decided to renovate. Now he and his partner, Craig Dwyer finally have the house of their dreams.

“The house was in good condition when I bought it from my father, but it was very dark,” says Franey. “From the earliest stages, my mother pushed me to remove the wall between the living room and kitchen to open it up – and while I wanted to do this for a long time, I needed Craig to give me the final push to get the designer and builders in.”

The two-bedroom, yellow-brick terraced house in Stoneybatter has a small outside space along with a downstairs bathroom, living room and kitchen. And although the property was on the small side, influenced by TV designers, the pair knew they could make something special out of it. They got to work, knocking down walls and letting light into the old building.

“The way that the house was configured meant that any natural light came into the kitchen but a dividing wall (between the kitchen and living room) resulted in very little light in the space we spend most of our time in,” says Franey. “So knocking that down to make the ground floor more open plan, and bring in more light, was the top priority – you can tell we’ve watched too much Dermot Bannon on TV.”

“We wanted to put in a skylight in the kitchen, the biggest we could get, but it was actually the engineer who suggested to put in a new pitched roof over the area to bring in even more natural light.”

The look they wanted was a modern, contemporary yet cosy feel which would feel like a bright airy space and be inviting to visitors.

“We enjoy having friends over for dinner, so we were keen to have a space where we could entertain,” he says. “So the dining table is now located where the living room meets the kitchen, with a custom-built bench (which acts as extra storage) on one side and space to seat four more guests around the table.

“Also, as we both cycle to work, one very practical consideration was our bicycles. We store them in the living room – due to lack of space – so we decided to build in a small partition wall to create an enclave where we can keep them inside but out of sight.”

The layout of the kitchen remained the same, but with some clever design, they made better use of the space. Also by creating more storage in the bathroom they were able to move the washing machine in there and just have the dishwasher in the kitchen which freed up more room. These small changes were in addition to a new layout and both interior and exterior design which ensured the house would be unique.

“We wanted the house to be a little bit different from others on the street, hence the big yellow door and single pane black aluminium windows which attracted a lot of attention in the neighbourhood,” says Paul. “This theme is carried throughout the house, with bright colours and quirky features, like the black steel frame and the tile border separating the two (downstairs) rooms. And we went even funkier in the bathroom with colourful and geometric print wallpaper, a yellow wash basin and yellow grouting in the tiles.

“But apart from a bit of painting, we didn’t do any of it ourselves – instead we worked with Emily from InSpace Design who was absolutely integral to the project – taking our ideas and transposing them into the finished product. She also added extra flair and features which we never would have thought of – as well as assisting with managing the project and liaising with contractors. We just made decisions about tiles, colours, fixtures – and paid the bills.”

While the planning of the refurb went on for ‘what seemed like years’, the project itself only took four months – although there was a hiccup a few weeks after completion when a leak in the kitchen meant the new herringbone floor had to be replaced.

The project cost around €60,000 but Franey and Dwyer say it was worth every penny.

“It’s honestly beyond what we could have ever imagined – the house is totally transformed,” says Dwyer. “Friends have commented on how much bigger it is – even though we didn’t add any extra floor space. And because we embarked on this project together and agreed on (almost) everything, it feels like our home – where previously it felt more like I was living in Paul’s house.

“Now on these cold winter evenings there’s nothing better than relaxing on the couch in front of the gas stove and having the gold pendants above the fire set to low – it’s luxuriously cosy and it’s these little details which make our home feel extra special to us, and we’re so grateful to Emily for helping us achieve that.”

“My family also love the new house – mum in particular, is delighted that the wall has finally come down,” says Franey. “And we are planning a big family get together for the aunts, uncles and 40 cousins who would have remembered the old family home.”

Have you recently refurbished your home, or built one from scratch? If so, we’d love to hear how you got on. Please get in touch by emailing homeanddesign@irishtimes.com

Recovering from cancer and bereavement through running
9