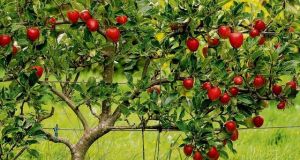 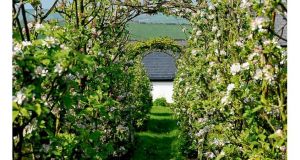 A formal allee of trained apple trees in full bloom in the west Cork garden of gardener Joy Larkcom.

All across Ireland neighbourhoods are coming together to grow community orchards, writes FIONNUALA FALLON

Tomorrow marks the beginning of National Tree Week (see treecouncil.ie), with the theme of this year’s celebrations, “A Feast of Trees”, highlighting the importance of these giant plants’ role as a vital food source not only for humans but also a myriad of other living creatures. As a place that offers nourishment for the soul and the body, an organically managed, traditional orchard is one of the finest examples of trees at their productive best.

These fruitful places also bring plenty of other benefits-in-kind, providing a haven for small animals, birds, insects, a tranquil refuge for us two-legged mammals and a place of safety for the trees themselves by preserving heritage varieties for the future. While most gardeners would jump at the chance to create such a traditional orchard, the stumbling block has always been having the space to plant on such a large scale.

And yet, all this time, given a small leap of imagination and shift in attitude, the solution has been lying right under our noses, or more accurately, in our immediate neighbourhood – it’s called a community orchard.

All across Ireland communities are beginning to get together to plant such orchards, using land wherever they can find it – along the edges of disused railway lines, the sides of GAA pitches, in school gardens, parks, church grounds, hospital grounds and village squares as well as in more conventional community gardens themselves. Always seek the permission of the relevant landowner before planting.

One example is Ramelton in Co Donegal, where this week 500 fruit and nut trees will be planted in various public locations in the town by its Tidy Towns committee. Limerick Riverpath Volunteers are also in the middle of finalising plans to develop a “secret orchard” along the city’s Park Canal to be enjoyed by locals as well as passersby.

Similar community orchards are planned for Ballymun, Clondalkin, Waterville in Co Kerry, Rathcabbin in Co Tipperary and Lanesborough in Co Longford as well as a host of other locations, with some of these receiving funding from supportive bodies such as the Tree Council of Ireland.

Santry Community Orchard is situated in the grounds of a once-derelict, 4½ acre, historic walled garden in the heart of Santry village. Owned by Fingal County Council, since 2010 it’s been gardened by a core group, of about 80, of determined, enthusiastic and impressively hard-working local volunteers, who together are in the process of returning it to being a fully productive space.

A walled garden of three parts, in its Victorian heyday, it was famed for its fruit production with historical records showing that its giant orchard (the middle of the three inner walled gardens) once contained close to 400 trees including 174 different cultivars of apple, pear, plum, cherry, nectarine, quince, peach as well as nuts.

None of these trees remained by the time that Santry Community Garden was established in 2010 but with the goodwill of the council behind them, this newly-formed community group has set about replanting the orchard, drawing on the shared knowledge, skills and experience of its members.

Some, such as Niall O’Connor, Martin O’Donoghue and Ciara Travers, are knowledgeable horticulturists, while others such as Donna Callan have brought organisational and people skills to the project.

Another great stroke of luck was O’Connor’s chance meeting with David Howell (“we met at a course for master composters”), who turned out to have a passion for pruning, training and grafting orchard trees. Invited to come on board, he now shares his considerable skills with the group. Last week Howell gave them a master class in the art of grafting apple trees, using scion wood taken from UCD’s collection of heritage apples and a variety of different rootstock provided by the specialist Irish nursery Fruit Nut ( fruitandnut.ie). The resulting grafted trees (all 100 of them) will soon join the 180 trees already planted in Santry’s community orchard over the last couple of years.

Santry Community Orchard operates on a shoestring budget with only sporadic funding – some from charities such as “Trees for Cities” ( treesforcities.org) and the rest from members of the local community garnered through a small membership fee and through sponsoring the costs of a tree. Each sponsored tree bears a neatly printed aluminium label containing a dedication and the name of the donor, many of them grandparents gifting trees they hope their grandchildren will enjoy long after they’re gone. santrycommunitygarden.ie

Grow your own trees

With soils finally drying out but the bare root season not yet over, now is a good time to plant fruit and nut trees, and to graft them. Whether you wish to plant a single tree in your garden or an entire orchard, here are a few key things to bear in mind to ensure a bountiful harvest for the future.

Rootstocks: Most fruit trees (apples, cherries, pears, quinces, plums, gauges, damsons, peaches, nectarines) are grafted or budded, a skilled technique by which the vascular tissue of one plant is inserted into that of another. This is done so that the very best qualities of any particular cultivar (for example, tastiness) can be combined with the very best qualities of a particular rootstock (for example, dwarf-growing, or a tolerance for damp soils). Choosing the rootstock that best suits your garden’s location, soil conditions and microclimate as well as the available space and the training method is crucial.

Confusingly, some nut trees are also grafted onto rootstocks, but in this case they don’t offer the same qualities as the rootstock of fruit trees, especially when it comes to dwarfing. A good nursery/garden centre should always be able to offer you expert advice in this regard.

Training habit: Most tree fruit and a few nut types can be trained in a variety of ways – espalier, cordon, fan, stepover, standard and so on – to suit a particular site. Consult books such as Dr Hessayon’s The Fruit Expert for detailed advice.

Site: As a rule, fruit and nut trees generally prefer a sunny, sheltered, free draining spot with a deep, fertile, loamy soil and protection from cold winds and winter frosts. Give them a frost pocket and a poor, wet soil and they’ll almost invariably repay you by dying. Be kind.

Pollinating partners: Along with pollinating insects, most orchard trees require at least one compatible pollinating partner (another tree) to produce a good harvest while even self-pollinating types benefit from their presence. For trees growing in an urban environment, such pollinating partners can often be growing in neighbouring gardens, making it less of a concern than it will be in a more isolated rural garden/orchard. Just as for rootstocks, any good nursery/garden centre should be able to advise.

Planting: This is a job for two people. Make the planting hole generously wide and a little deeper than the tree’s original planting depth. Add a small amount of manure/ garden compost if the soil is poor, and work it well into the loose soil.

You could also add some dried seaweed dust and mycorrhizal fungi (from good garden centres). Soak the root ball in water for a few minutes and then place in the hole, spreading the bare roots onto a gentle mound of earth and positioning the tree so that the original soil mark is just above ground level.

Stake, making sure that the stake is to the windward side. Backfill, firm gently, water again and label. With all young trees and especially those grown on dwarfing rootstocks, keep a three- to four-feet-wide circle around the root weed-free by using a mulch or weed-suppressant membrane. Water regularly in dry spells until established.

Fruit and Nut Nursery is running a variety of pruning and grafting courses throughout this month. See fruitandnut.ie